In 2019 we published a five-year overview of the pre-owned business jet market in which we stated the market would shift towards a sellers’ market. Over the next two years that happened quicker than we expected, partly due to the effects that both Trump and COVID-19 had on the market. Now that we have reached the 25th ASQ issue, we look back over the past six-years and see what, if anything, has changed.

When the Trump Administration launched its tax reforms, the US stock market reacted very favorably, reaching record highs shortly after its introduction. But it also created a ‘cheap-money’ environment, which helped stimulate international companies to invest in the US and was behind an increase in spending of High-Net-Worth Individuals (HNWIs). Consequently, the demand for business aviation increased, especially in the US.

However, the main driver for the switch to a seller’s market has been COVID-19. With airlines cutting schedules and downgrading service levels, business aviation began to pick up new customers. Although this was partly due to a decrease in airline schedules, it is also due to the relative safety that travelling on your own aircraft can bring. This not only applies in the air, but on the ground as well – flying privately reduces potential infections from crowded airport terminals.

The US has seen a huge increase in first time clients chartering private jets in 2021, and this trend looks to be continuing into 2022.

We have also seen very noticeable evidence of being in a seller’s market in our aircraft brokerage business, which is as busy as it has ever been, with enquiries flooding in seconds after we list an aircraft for sale.

With market demand so high, it is no wonder that 2020 and 2021 saw record levels of transactions in the pre-owned business jet market. This comes against the backdrop of COVID-19 making face-to-face negotiations a lot harder, and in some cases impossible due to boarder restrictions and quarantines. In December 2020, the market closed deals on 114 business jets* in a single month, with the majority being large cabin, long-range models.

*Stats are from ASG’s Market Dynamics research by taking a selection of 39 popular business jet models on pre-owned market.

As of publication we are seeing all time low inventory levels. (i.e., the percentage of number of aircraft for sale vs. total aircraft in operation). At the end of Q4 2021 that figure was just 2%, whilst in Asia-Pacific that number is higher at 5%. Since the first issue of ASQ in Q4 2015 the highest percentage of inventory we have seen has been around mid-2016, when the Asia-Pacific figure was around 14% and the global figure around 9%. To put that in terms of actual numbers of aircraft available, in 2015 there were around 600 aircraft on the market, whilst today there are around 200. Many of the aircraft that are on the market are older aircraft that have already clocked up a lot of hours. We have also seen the average asking price for pre-owned models steadily increase since mid-2020, which has helped counter the aircraft’s depreciation due to usage and natural aging.

*Stats are from ASG’s Market Dynamics research by taking a selection of 39 popular business jet models on pre-owned market. 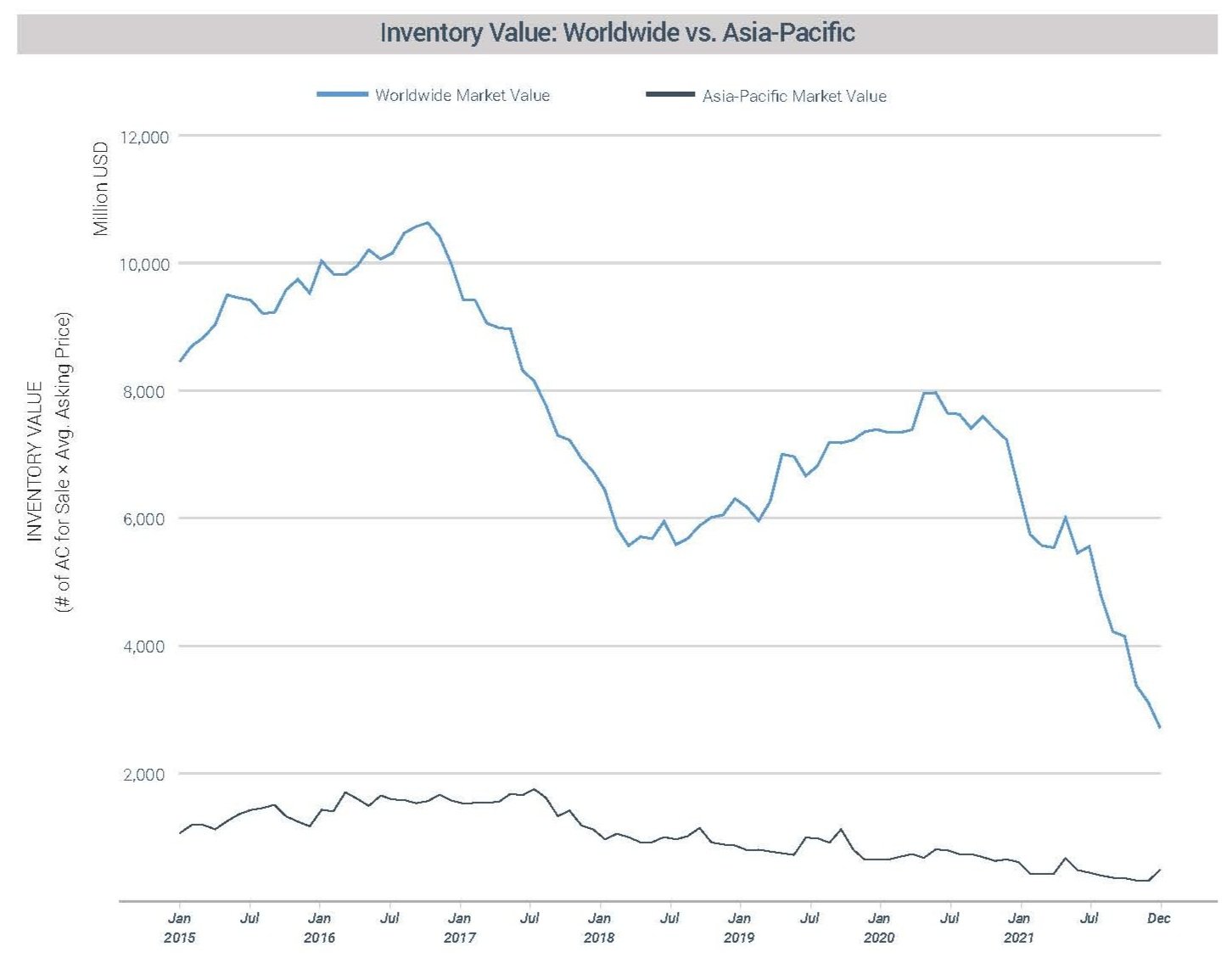 Market Forecast: What to Expect?

Unfortunately, COVID-19 will be with us for at least the near future, and unless something else comes along, we believe that the market will stay strong for at least another year. We also believe that pre-owned market supply will not be eased in the meantime, at least not until OEM production increases have reduced new delivery lead times. Therefore, we believe that market conditions going into 2022 are unsustainable.

This can also be seen in our Market Trends chart shown below. The market trend began to shift to the seller’s benefit in early 2020, and as the market consumption continued to speed up, it officially entered the seller’s market in early 2021 – partly due to a record number of transactions in December 2020. In 2021 we did not see any signs of transaction levels slowing down, and the market momentum has been brought up to a historically high level as we enter 2022. The momentum is so strong that it has peaked more than at any other time that we have witnessed. However, we believe that it is not sustainable, and that we will see a minor shift in the market trend during 2022. 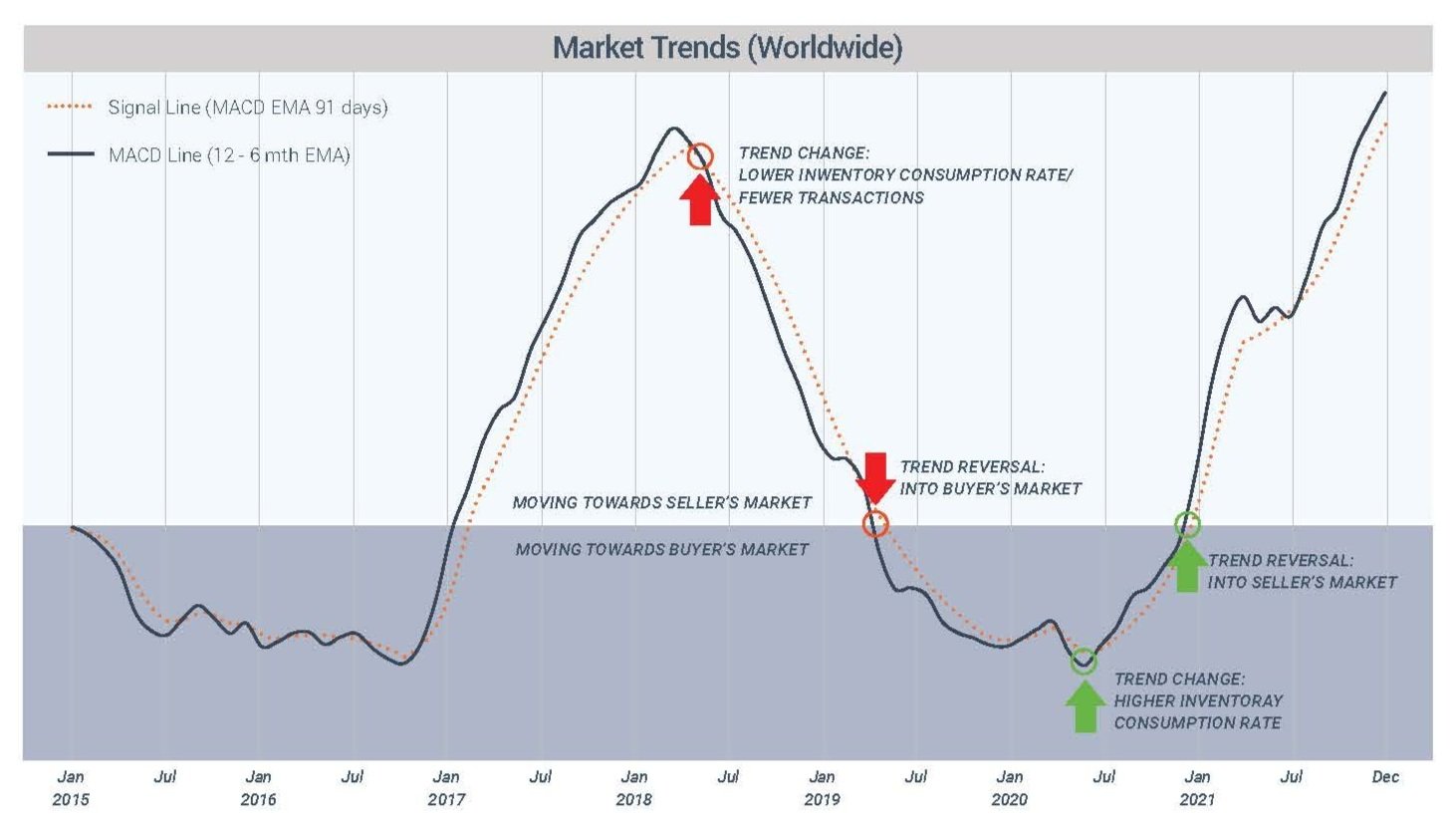 by Bowen Zhang January 28, 2022
Demand / Supply Shift In our regular Market Dynamics section we have a positioning chart…
Business Aviation by Global Sky Team January 28, 2022
“As a percentage of active fleet, business jet and turboprop pre-owned inventories are at another…