With a combined total of 387 business jets, the top 20 operators in Asia-Pacific accounted for 32% of the entire APAC fleet at the end of 2021. Approximately 65% of the operators on the list primarily operate in Greater China. None of the top five operators saw net additions to their fleets, instead, they saw a combined net reduction of 16 aircraft during the year.

Sino Jet retained its top spot as having the biggest fleet in the Asia Pacific region. Despite having one net deduction from its fleet, Sino Jet took the most new deliveries of aircraft directly from OEMs in Asia-Pacific. BAA moved up one spot to second place, although there was no net change to its fleet. During the year it doubled the number of G650ERs in its fleet and introduced two Global 6500 aircraft.

Among the top 20 operators, only four saw growth in their fleet size. Those operators were Lily Jet, Phenix Jet, Astro Air and Seletar Jet. Lily Jet had the most net additions, including four Bombardier Global 6000s. Seletar Jet had the most significant change in fleet size ranking, moving up by nine places to the 17th, thanks to three net additions.

Lily Jet, Phenix Jet, Astro Air and Seletar Jet have now seen positive year-over-year growth for three consecutive years. These four operators all moved up the ranks by at least three places. Amber Aviation and Brilliant Jet have seen no decreases in their fleets since their establishment in 2016. 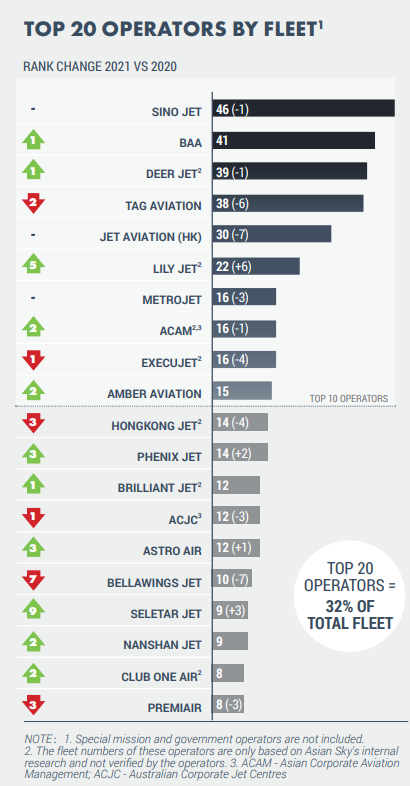 TOP OPERATORS IN EACH COUNTRY

Australia accounted for the second-largest fleet in the Asia-Pacific region, with 209 business jets in 2021. Australian Corporate Jet Centres had the largest fleet in the country with 12 jets. ExecuJet made it to the top 20 operators list, with seven of its 16 aircraft are based in Australia.

Club One Air had no net change to its fleet size and remained the top operator in India with eight business jets. It moved up two places in the overall APAC rankings, making it one of the top 20 operators in the Asia-Pacific region. Reliance Commercial Dealers ranked second in India with seven jets in its fleet.

Five of the top 20 operators operate a portion of their fleets in Singapore. Asian Corporate Aviation Management (ACAM) has the largest fleet in the country. Seletar Jet came second and moved up nine places to land in the top 20 list.

Japan saw the largest net increase in fleet size in 2021, with Phenix Jet being the top operator in the country. Aero Asahi, Fuji Business Jet and Noevir Aviation tied for the second-largest fleet in Japan. 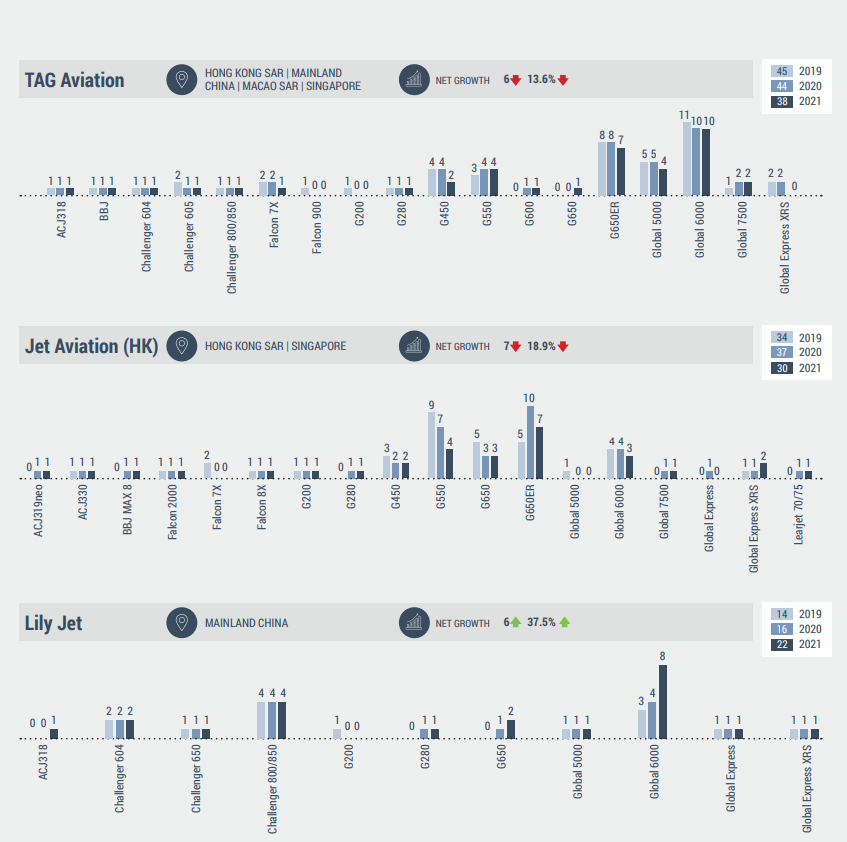 Malaysia saw the second-greatest net decrease in fleet size in 2021. Most of the major operators saw their fleets shrink except for Smooth Route, which operates four business jets and tied with Redland Aviation Services as the biggest operators in the country.

Although the Philippines saw a net decrease of three jets from its fleet, the number of business jets operated by top operators has not changed. Asian Aerospace and Challenger Aero Air, both have six jets and continued to lead the ranking in the Philippines.

Indonesia saw no net change in its fleet in 2021. Premiair remained the top operator in Indonesia with eight business jets.

Thailand, New Zealand, South Korea and Vietnam all experienced a net increase in their fleet size in 2021. The top operators in these countries are MJets, Skyline Aviation, Korean Air and Metrojet, respectively. 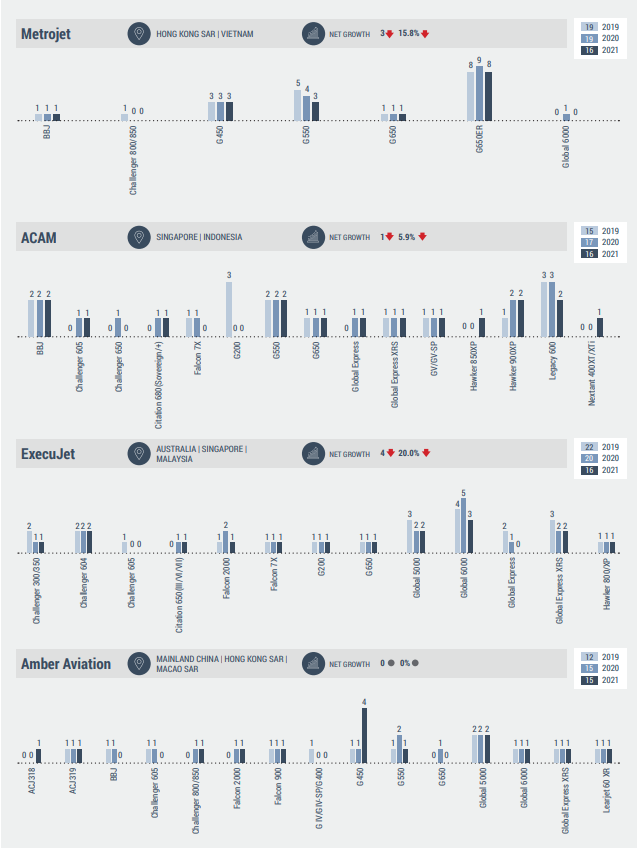 by Global Sky Team May 6, 2022
With a combined total of 387 business jets, the top 20 operators in Asia-Pacific accounted…