There were 1,215 business jets in operation in the Asia-Pacific region at the end of 2021, which was a decrease of around 1.1% when compared to the 1,228 business jets at the end of 2020. The fleet saw a net reduction of 13 units as a result of 33 new deliveries, 68 pre-owned additions, and 114 deductions. Although the number of preowned additions rose from 53 to 68, it could not offset the decrease in new deliveries and increase in deductions. In addition, there were 11 intra-APAC movements – a decline of eight units since 2020.

The number of deductions surged from 74 in 2020 to 114 in 2021, which is largely attributed to the relocation of pre-owned aircraft leaving the region. These aircraft mainly left mainland China, the Hong Kong SAR and Australia and went to the United States.

Bombardier overtook Gulfstream and became the OEM that delivered the most new business jets into the APAC region in 2021, with 12 units in total, making up 36% of total new deliveries and 50% of the total new aircraft value. Although the number of new Gulfstream deliveries dropped to nine units in 2021, it still represented 37% of the total new aircraft value – US$598.5 million. The G650ER lost its place as the most delivered business jet in the region, a title it had held for three consecutive years. It was overtaken in 2021 by Bombardier’s Global 7500, with seven new deliveries into the region.

Bombardier dropped to second place in 2021, with only 16 pre-owned additions during the year. However, in terms of value, Bombardier retained its top spot, seeing an increase of US$49.7 million to US$243.3 million in 2021, which gave it a market share of 33% in pre-owned value. This was followed by Gulfstream and Dassault, while Textron only ranked fourth with US$74.4 million. 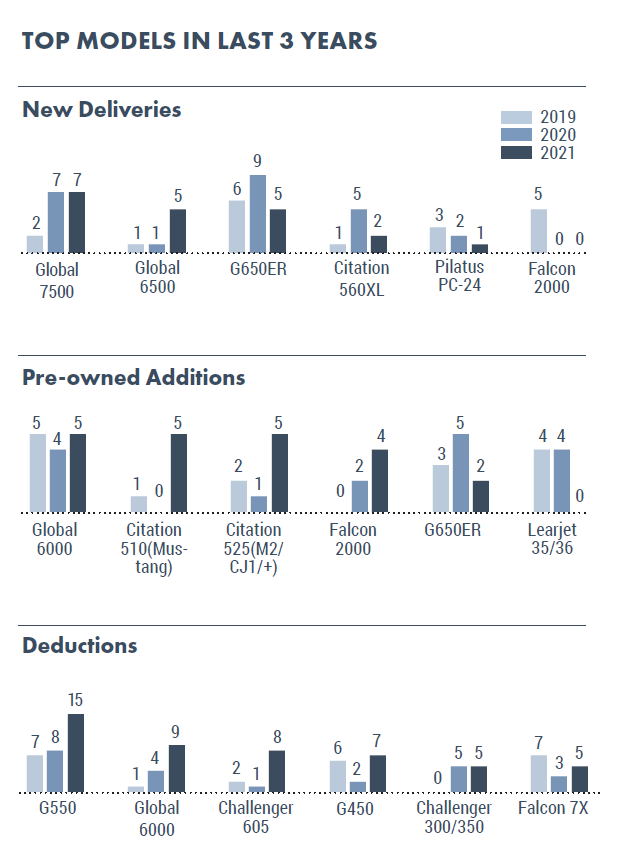 In total, 48% of the value of all business jets that left the Asia-Pacific fleet during 2021 were built by Gulfstream. This is largely due to Gulfstream’s fleet mainly consisting of Long Range and Large Cabin business jets. The OEM’s fleet dropped by 35 aircraft which was valued at US$774 million in 2021. This was followed by Bombardier, which lost 44 jets worth US$531.7 million (33%). The G550 continued to be the type that saw the most deductions, which has now continued for three consecutive years. 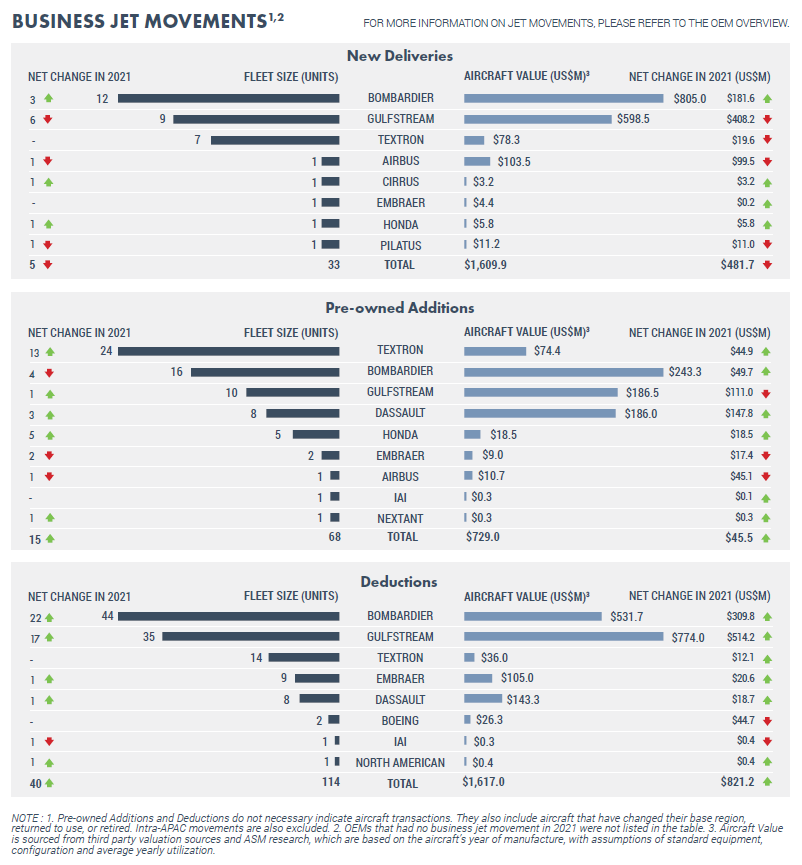 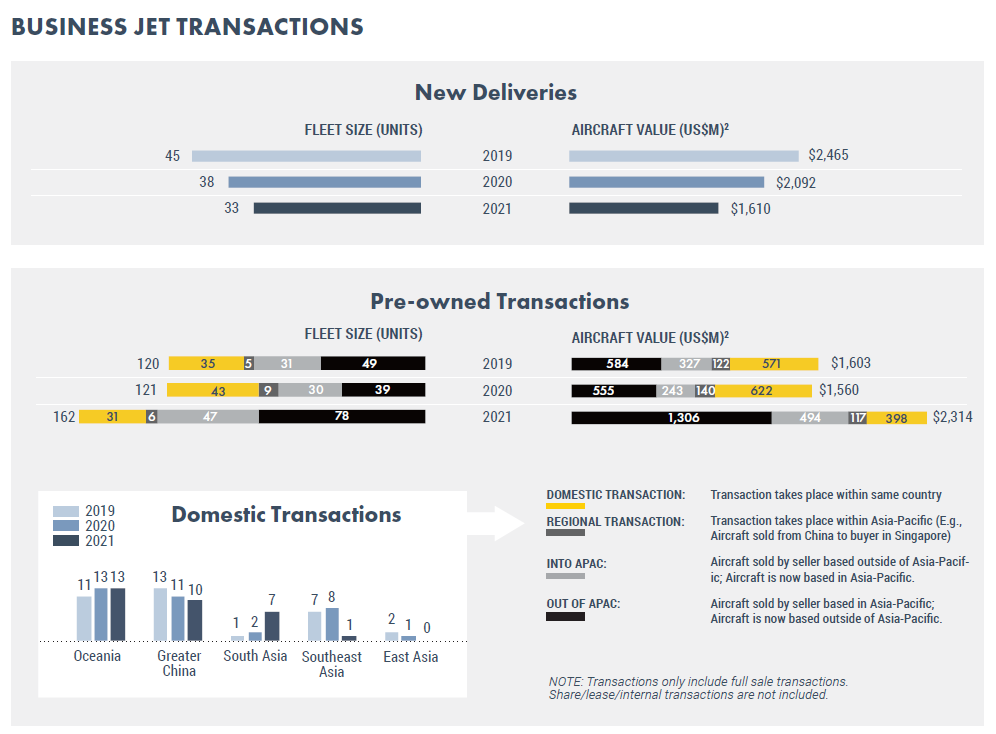 Across the past three years, Long Range, Large, and Light jets were the major size categories in business jet transactions, making up over 75% of total transactions. We expect this to continue in 2022.

With the survey being inconclusive and telling us that the fleet will either be one and a half times or twice as big as it is now, we went directly to some of the biggest names in Asia-Pacific business aviation and asked for their opinions.

The general feeling was that the fleet is likely to double in ten years’ time. Out of the four different people we asked, three said twice as big, whilst one said 1.5x as big. However, the person saying 1.5x as big did so by prefacing his prediction by saying that he was likely being pessimistic.

Of those that answered, Jason Liao of the China Business Aviation Group, Janny Lau of Sino Jet and Gary Dolski of Metrojet all said twice as big, whilst David Dixon of Jetcraft said 1.5x as big.

For Gary Dolski the CEO of Hong Kong-based Metrojet, one of the main considerations behind his prediction is that 2022 sees the Asia-Pacific fleet at a low point, and as such, the fleet doesn’t have to grow as much to double as it would have done a few years ago. This, says Dolski has been due to pandemic related border closures and quarantines which have stifled the fleets in both mainland China and Hong Kong to such an extent that owners have either elected to sell their aircraft, or move them outside of the region. However, Dolski believes that this is likely to be temporary, and buyers will return once mainland China and Hong Kong start opening up to the rest of the world again. 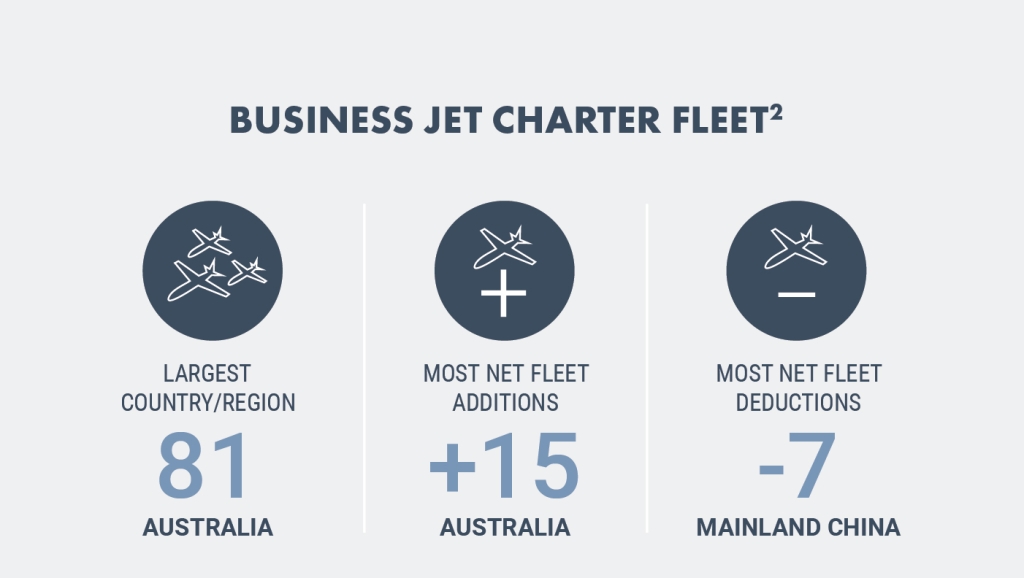 by Global Sky Team November 7, 2022
Textron is the most popular manufacturer of charter aircraft in Asia-Pacific with a total of…
Charter Report by Global Sky Team November 7, 2022
In the previous section of the report we looked at charter operators based in Asia-Pacific.…