Here’s a round-up of the eVTOL news that made headlines in and around Asia.

Guangzhou, China-based drone maker EHang delivered the first batch of “passenger grade” EHang 216 autonomous aerial vehicles (AAVs) in June 2019, followed by a second batch in October. The 216 model is a two-seater, with 16 propellers and can carry up to 220 kilograms.

EHang has already conducted over 2,000 flight tests around the world, and is working with regulatory authorities including the European Union Aviation Safety Agency (EASA), the International Civil Aviation Organization (ICAO), Civil Aviation Administration of China (CAAC), and others “to ensure that global regulatory standards are able to efficiently meet the demands of future urban air mobility,” according to the company.

In October, the company struck a strategic partnership with telecommunications giant Vodofone. As an exclusive partner for EHang, Vodofone will equip all EHang AAVs operating in Europe with Vodafone SIM cards and connectivity.

Its most recent partner is with property developer Heli Chuangxin Real Estate Co. Ltd. to build the infrastructure for the world’s first commercial in-city sightseeing urban air mobility route in Guangzhou. The two companies plan to establish a low-altitude air transportation network that shuttles passengers and cargo in a safe, fast and cost-efficient manner. The pilot program enables EHang to test more flight routes and vertiports before moving into passenger-grade commercial operations.

In 2018, EHang began commercial operations of air cargo transportation in and near Guangzhou, working with the express delivery company DHL-Sinotrans and retail company Yonghui.

The drone maker filed with the US Securities Exchange Commission to sell an estimated US$100M in depository shares in an initial public offering. Terms have since been set for the company’s IPO, with intentions to raise approximately US$43M at a price range of US$12.50 to US$14.50 per share.

In August of 2019, Volocopter revealed its fourth-generation electric vertical takeoff and landing (eVTOL) design, the VoloCity, intended to be its first production aircraft. The company says that the VoloCity has been designed to meet the safety standards specified by EASA and incorporates user feedback, as well as test data from all previous Volocopter generations, including more than 1,000 test flights.

With a calculated range of 22 miles (35 km) and an airspeed of 68 mph (110 km/h), the VoloCity is designed to serve as an on-demand, inner-city air taxi. Like Volocopter’s previous models, the VC200 and 2X, the VoloCity is powered by 18 electric propellers and has seats for two passengers. However, the VoloCity has a number of refinements, including increased flight efficiency through more aerodynamically shaped propeller support beams and a newly introduced stabilizer for increased lift and additional stability in forward flight.

In September 2019, the company announced it had signed the first closing of its Series C funding round, by Zhejiang Geely Holding Group (which had previously acquired US-based Terrafugia — developer of a roadable aircraft and a flying car), followed by new and existing investors from Europe, North America and Asia. The funds will be used towards bringing the VoloCity aircraft to commercial launch within the next three years. This closing increases the total capital that Volocopter has raised to US$94M. Geely and Volocopter have also entered into a joint venture to bring urban air mobility to China.

After successful flights with its 2X demonstrator at the Helsinki Airport and in Stuttgart, Germany, Volocopter made its first manned flight over Singapore’s Marina Bay  in October. The Volocopter 2X flight was just under a mile (1.5 km) and lasted for two minutes at an average cruising height of 130 ft (40 m).

This was the final demonstration of a demanding test series to verify and validate the ability of Volocopter air taxis to fly over the area. Government authorities including the Singapore Ministry of Transport (MOT), the Civil Aviation Authority of Singapore (CAAS) and the Economic Development Board (EDB) supported Volocopter in this testing phase and plan to continue to do so in the future. “This flight kicks off Volocopter’s efforts to bring commercial air taxi services to Singapore,” the company stated.

The company, alongside Skyports, Ltd., also unveiled what they called “the world’s first full-scale air taxi vertiport” at the Intelligent Transport Systems (ITS) World Congress in Singapore. According to Volcopter, “The VoloPort is designed to offer an exceptional passenger experience, using the most modern safety and security processes. Its modular design can be easily adapted to fit rooftops, railway stations, parking lots and other metropolitan locations. It will accommodate a wide range of electric air taxis, serving business travelers, tourists and anyone else fed up with sitting in traffic.”

Volocopter and Skyports also announced that they will continue their partnership with the aim of introducing commercial air taxi services in Singapore and beyond. In support of its expansion plans, Volocopter opened an office in Singapore in January 2019 and has started to build up a local team. Skyports followed suit in September 2019. Based in London, Skyports also develops, implements and operates end-to-end drone deliveries globally.

The company has also embarked on expansion into the logistics and agriculture industries with its VoloDrone — an unmanned, fully electric, heavy-lift drone capable of carrying a payload of up to 200kg (440 lbs). With a standardized payload attachment, VoloDrone can serve a great variety of purposes from transporting boxes, to liquids, to equipment and more; the drone was specifically engineered to serve challenging missions.

Volocopter is partnering with American agricultural company, John Deere on a large drone adapted for agricultural use. Featuring a potential payload of 200kg, the VoloDrone is able to cover an enormous area, especially under difficult operating conditions.

In December 2019, Volocopter was awarded the Design Organization Approval (DOA), following a series of audits. The approval is a confirmation by EASA that Volocopter is performing its tasks as an aircraft manufacturer in a controlled and safe manner.

XTI Aircraft Company, developer of eVTOL aircraft — namely the Trifan 600, participated in an investment trade fair in Guizhou Province, China in September. A draft agreement was signed regarding the formation of a joint venture in China that could provide the means to assemble and support the TriFan 600 aircraft in Guizhou Province, as well as to market and sell in a specified geographical area.

XTI has since received utility patents from the Japanese Patent Office and the China National Intellectual Property Administration (CNIPA) for the technology and configuration of the TriFan 600. “These two patents together provide broad protection for our unique aircraft in the significant Asian market, and enable us to continue to expand our global market,” said Robert LaBelle, Chief Executive Officer of XTI.

Also expanding into Oceania, XTI entered into a sales and services agreement with aircraft distributor, Heliflite — headquartered in Australia. The agreement includes engineering and maintenance services for the TriFan 600, as well as a role in XTI’s pre-sales and sales program. The exclusive agreement covers Australia, New Zealand and the rest of Oceania, as well as Indonesia and the Philippines.

The company signed a term sheet with a lead investor for a minimum US$17M and maximum US$29M financing. The terms provide for a combination of equity and convertible debt. Closing was tentatively scheduled for January 2020 and is contingent on both parties completing due diligence and signing a final definitive agreement.

Hyundai Motor Group revealed in September 2019 that it established an Urban Air Mobility Division and appointed Dr. Jaiwon Shin as its Executive Vice President and Head. Shin was most recently the NASA Associate Administrator for Aeronautics at NASA, where he shaped the agency’s aeronautics research and development strategy for 11 years.

South Korean industrial giant Hanwha announced in July that it was investing US$25M in a spin-off from Karem Aircraft, Inc., named OverAir. The new company will be dedicated to bringing its all-electric air taxi vehicle — Butterfly — to market. The Butterfly is being developed for Uber Elevate and uses Karem’s Optimum Speed Rotor technology to power a vectored-thrust vehicle with four large rotors mounted on the wings and tail. Butterfly’s large, slow-turning rotors provide efficient lift and reduced noise, which is key for operating at scale in cities.

Hanwha Systems is leading the US$25M Series A investment into OverAir, pending regulatory approval. Hanwha brings financial support, a deep history of manufacturing and industrial scale to accelerate the Butterfly air taxi vehicle to market. In December, the investment received approval from all necessary authorities.

Japanese flying car developer SkyDrive announced in September that it secured US$14M through third-party share issuance funding and subsidies, for a total of US$18.5M raised.

SkyDrive, Inc. was established by the members of Cartivator— a group of aircraft, drones and automotive engineers. In December 2018, the first Japanese outdoor flight test of a flying car (unmanned) was conducted with regular testing throughout 2019. Japan’s largest flying car flight test field was opened in Toyota City in June 2019 as part of a “partnership agreement of flying car development for the creation of new industries” with the cooperation of Aichi Prefecture and Toyota City. SkyDrive said that development for this year’s manned flight test launch is underway, as well as preparation for the flight demonstration in summer of 2020 and sales release in 2023. October 5, 2022
EHang said its Project Specific Certification Plan of EH216-S has been officially approved by the…
Advanced Air Mobility 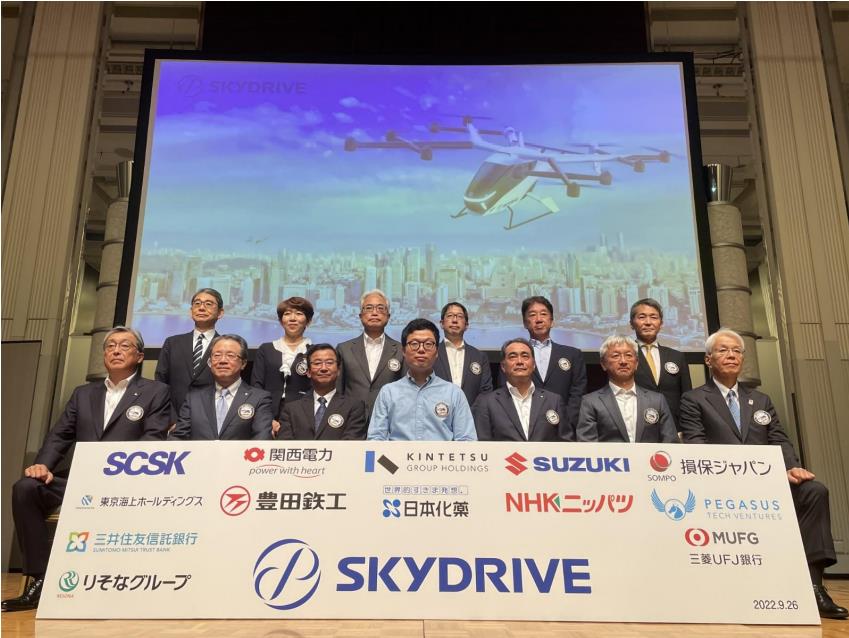