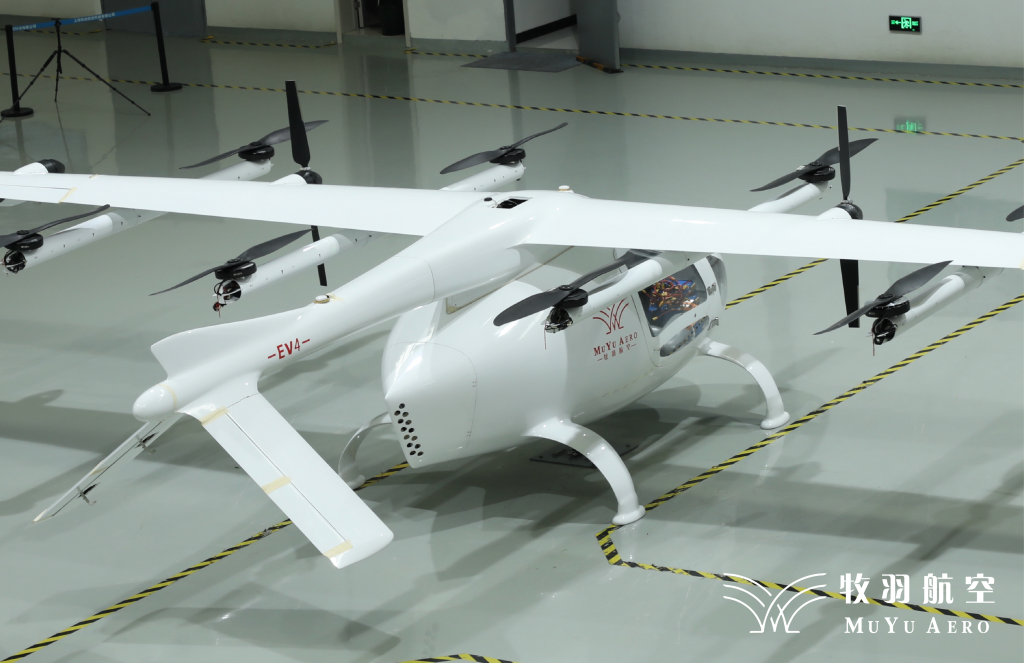 MuYu Aero, founded in 2018, is a Chinese eVTOL manufacturer based in Shanghai, China. The company is currently developing four seat and seven seat passenger eVTOLs.

What is the development strategy and plan for MuYu Aero’s eVTOLs?

Based on the safety requirements of passenger aircraft and the operational safety requirements of urban airspace, as well as the incompatibility of current airworthiness regulations and control measures, our strategy is to develop heavy-load logistics eVTOL drones first, and then gradually transition to passenger-carrying flights, that is, to use logistics eVTOLs to provide the technical forerunning for passenger eVTOLs. We plan to get the airworthiness certificate of our logistics eVTOL in about three years.

At present, we plan to have two types of cargo eVTOLs and two types of passenger-grade eVTOLs. The cargo models are the AT1200 and the AT8000, with take-off weights of 1.2 tons and 8 tons respectively, and a payload of 0.5 tons and 4 tons, respectively. The passenger-grade versions are the EV-4 and the VJET-7, with take-off weights of 1.2 and 2.5 tons and four and seven seats, respectively. In the future, the AT8000 will also be developed into a passenger eVTOL when it matures, and it will then be able to carry 25 – 30 passengers.

What is the difference in market positioning between the VJET-7 and the EV-4? What are the different designs adopted in terms of configuration?

The VJET-7 is targeted at the future vertical take-off and landing business aircraft and the inter-city and rural air express markets, which all require a relatively long range and a high cruising speed . Its maximum range is 2,000 km and it has a cruising speed of 450 km/h. The choice of configuration is mainly based on the application scenario and the maturity of the technology. Therefore, the VJET adopts the ducted power and tilt configuration, which can guarantee the take-off and landing performance while considering the requirements of flight speed and flight efficiency. At the same time, the aerodynamic factor should be considered more in the external design. In fact, its appearance is more like a dolphin.

The EV-4 is designed for short-range, low and medium-speed flights, which is why the composite wing configuration is a balanced solution between efficiency and technical risk. The appearance of the EV-4 will change later, mainly due the requirements of passenger and equipment space.

How does the VJET-7 design achieve its “business jet” positioning?

First, an additional benefit of using the ducted rotor is that noise levels are much lower than that of an open propeller, as well as the excellent sound insulation of the composite sandwich fuselage, which makes the passengers more comfortable inside the cabin. And since this is an electric aircraft, the noise of the motor can almost be ignored. In addition, the interior and cockpit of the aircraft is developed in cooperation with former members of Italian automotive designer Giorgetto Giugiaro. We believe it will have good performance and bring a better experience to customers.

What are the requirements of the EV-4 and the VJET-7 for battery, motor and flight control systems?

The form of energy we have confirmed so far is hydrogen fuel cells, which are more suitable than lithium batteries in terms of safety, energy density and charging time, and they are environmentally friendly. We are also working with a well-known domestic fuel cell manufacturer to jointly develop a fuel cell system suitable for aviation, which will have a power density of 1.7kw/kg.

The self-developed power motor is a permanent magnet synchronous motor for our own aircraft. The key consideration in the design is reliability, and to increase the power density as much as possible on the premise of guaranteeing functional reliability.

No. We have seen several eVTOL aircraft with small, ducted power systems claiming to add STOL, which we consider unnecessary and will not work very well because conventional landing gear must be added, thus increasing the drag. If the landing gear is retracted, the weight would be increased.

Therefore, we believe that there is a technical risk behind an extravagant design. A design is not only for aesthetic considerations but also for the engineering implementation method and the feasibility behind it.

Will the EV-4 and VJET-7 be crewed or uncrewed?

Crewed. The current airworthiness authorities will not consider fully uncrewed flights for the next ten years, so there is basically no choice.

How are the flight tests of the EV-4 and VJET-7 progressing?

The EV-4 is in continuous flight test as a full- scale prototype, while the 1/5 scale-down demonstrator VJET-7 has completed the test flight in the V-tail configuration and is now testing the improved T-tail configuration, which we will compare to see which one works better.

When do you expect the EV-4 and VJET-7 to start commercial operations? What is the specific operating model?

In our current development plan, the aircraft will enter into service around 2030; however, the commercialization of the passenger model – I mean the commercial operation that can have a certain scale and can break even – will probably be after 2035.

Then there may be two specific operating models. One is vertical integration, where although the overall investment in this model will be large, it is easier to raise capital. The other is the traditional relationship between OEMs and operators.

Manufacturing and operations are separate, which is a relatively traditional model. It is difficult to promote in the initial stage, but it is relatively easy to expand the scale in the future.

What challenges did MuYu encounter in the R&D of vertical take-off and landing aircraft?

The imperfection and immaturity of the supply chain are probably the biggest problems faced by all eVTOL companies, which is a big challenge for R&D companies. MuYu has 18 years of experience in the industry and has very strong engineering capabilities. All of the aircraft design, production of molds, tooling, test rigs and almost all components, including the power motors, are done in our own factory, which will greatly shorten the R&D cycle and investment costs.

Does MuYu have any plans to participate in urban air transportation infrastructure?

There is no such plan at present.

MuYu Aero has not disclosed any financing information. Can you share your future financing plan?

1. A flight control law is a computer software algorithm that enables the pilot to control the movement of the aircraft by joystick or yoke.