Since the first issue of Asian Sky Quarterly in the fourth quarter of 2015, there have been a total of 23 different business jet models introduced to the global market, with their first deliveries occurring during the period. Although these have largely been minor upgrades to existing types, several new aircraft models were also introduced.

The HondaJet was perhaps the most anticipated. The aircraft can trace its history back to 1997 when Honda Aircraft’s now CEO Michimasa Fujino first started sketching out designs for a very light business jet with engines mounted above the wing.  Although there are certain aerodynamic advantages in doing this, in the case of the HondaJet, the engines are configured this way to increase space inside the cabin, as the structure and systems to support the engines are kept outside of the fuselage. Fujino’s idea certainly worked – the cabin of the HondaJet feels much more spacious than other business jets of comparable size. The company originally stated that aircraft would be built to serve as a flying testbed for the new HF120 Turbofan engines that the company was designing, however, in 2006 Honda Aircraft changed its mind and began offering the plane to the market, with the first delivery expected in 2010. The maiden flight of the first production conforming HondaJet took place in 2014, with the US FAA handing the aircraft type certification over the following year. The first HondaJet was delivered to a customer at the end of 2015. The company then updated the HondaJet in 2018 and renamed it the HondaJet Elite. As well as performance increases, the HondaJet Elite features an updated Garmin G3000-based flight deck. Overall, the HondaJet has had relative success in Asia-Pacific, especially in Fujino’s native Japan – at the end of 2020, there were seven HondaJets in Asia-Pacific, one each in Mainland China, Singapore, and Thailand, with the remaining four in Japan.

Bombardier’s Global 7500, which was first announced in October 2010 as the Global 7000, was also highly anticipated. Although the aircraft was originally scheduled to enter service in 2016, a late-stage wing redesign moved back its first flight and entry into service by almost two years. The aircraft was renamed the Global 7500 in May 2018 to fit in with the change to Bombardier’s naming system, with the first aircraft finally being handed over to the first customer in November 2018. A second model, the Global 8000, was also announced at the same time as the Global 7000. This was due to be smaller than the Global 7500, but with an increased range. There have been many questions regarding the Global 8000, and whether the program has been canceled, however, the aircraft still appears on the Bombardier website. Global 7500 deliveries have been slowly ramping up in recent years, and the aircraft has found some favor in Asia-Pacific, especially in Australia, where the aircraft’s 7,700nm range is especially appreciated.

Another new aircraft type to enter service was the Dassault Falcon 8X. This was first announced in 2014 as a one-meter stretch of the Falcon 7X – a fact borne out by Dassault’s internal project name, which was the Falcon 7X-M1000. As well as the fuselage stretch, the wingbox was strengthened, which also made room for additional fuel loading. The first Falcon 8X was delivered to a Greek operator in October 2016. The Falcon 8X is currently the largest business jet that Dassault builds, although this will be eclipsed in 2025 when the French manufacturer delivers the first of its new Falcon 10X business jets. The Falcon 8X has seen moderate success in the Asia-Pacific region, although it has been unable to match the success of the Falcon 7X. This could partly be due to a lack of certification in China – to date, China has not yet certificated the Falcon 8X. The first Falcon 8X to be delivered into Greater China was delivered to Hong Kong in the third quarter of 2017. It is registered on the Cayman Islands VP-C registry. 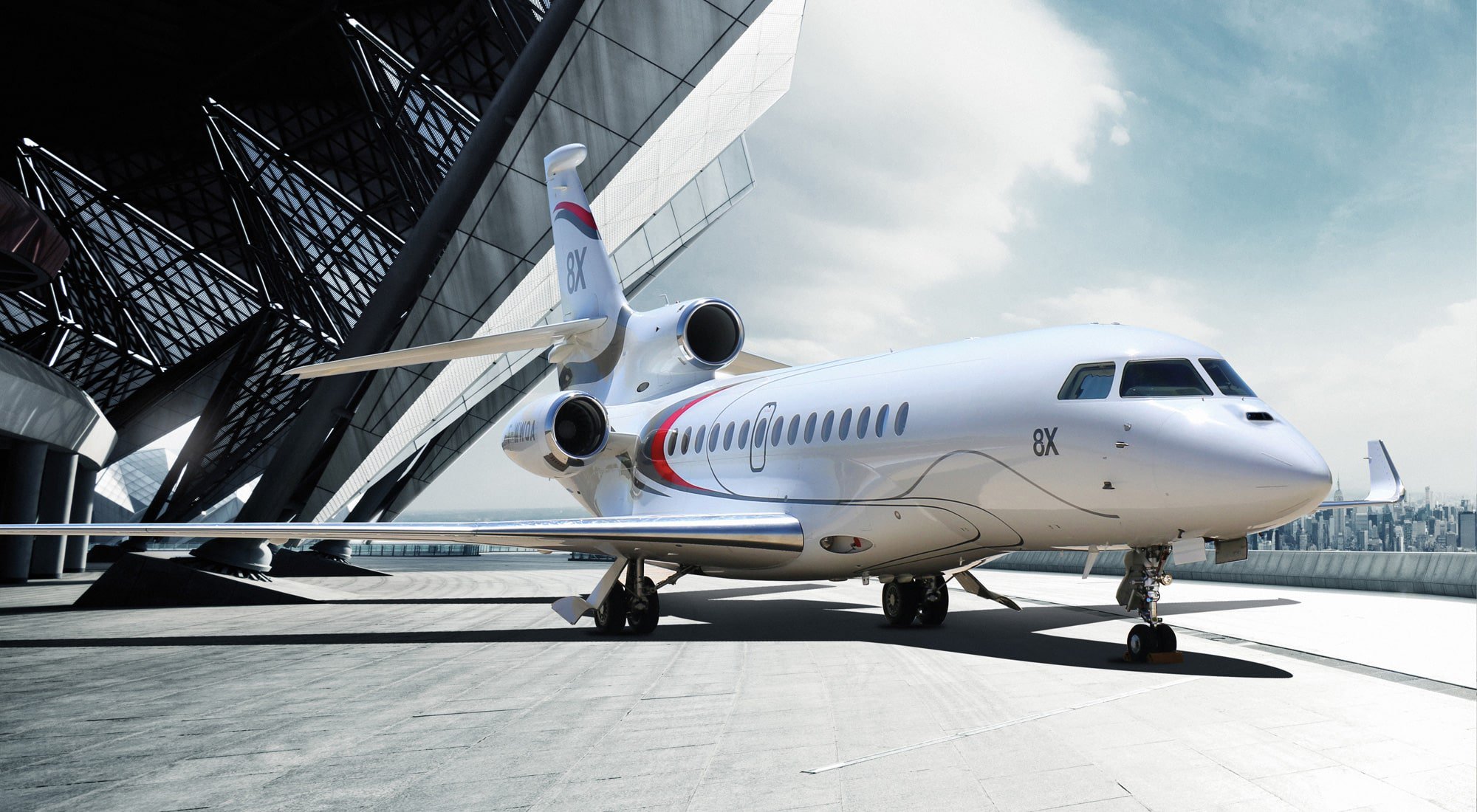 As well as delivering several updated, or ‘plussed’, aircraft models during the period, Textron delivered the first of its new Citation Longitude aircraft. The Longitude suffered some unfortunate incidents during its certification efforts, which pushed back its entry into service by almost a year. The first incident saw a part used in the manufacture of the aircraft becoming obsolete, whilst the second saw an additional set of paperwork being requested by the certification authorities. As well as being the largest Citation ever built, the Longitude is notable for having a very quiet cabin. Textron worked meticulously to eliminate as much noise as possible, with the result being that even during a max power takeoff, passengers in the cabin do not have to raise their voices to be heard. The first Longitude was delivered right at the end of 2019. So far, the Longitude hasn’t made many inroads into the Asia-Pacific market, although one order was announced by the Japanese Civil Aviation Bureau (JCAB), which will use the aircraft for runway calibration duties.

Bombardier announced its Global 5500 and Global 6500 during a special ceremony on the eve of the 2018 European Business Aviation Convention & Exhibition in Geneva, Switzerland. Essentially the aircraft are upgraded Global 6000s and Global 5000s with new engines, avionics, and interiors. The engines were swapped from the Rolls-Royce BR700 family to the newer, more fuel-efficient Rolls-Royce Pearl engines. Bombardier gave Rolls-Royce the task of building the new engines to fit inside the BR700’s engine casings and mountings so that structurally the fuselage of the new models did not need to change to be able to accommodate them. During the announcement, held inside a hangar at Geneva Airport, Bombardier was able to introduce the first Global 6500, which flew unnoticed into Geneva from the US the night before. Following a short certification period, the world’s first Global 6500 was delivered to Hong Kong in December 2019 to HK Bellawings, which had originally inked a Letter of Intent (LoI) in May 2018 for up to 18 Global 6500 and Global 7500 aircraft.

Not to be outdone, Gulfstream delivered the first of its G500 and G600 during the period. Both aircraft were announced in 2014, with Gulfstream wowing attendees during the announcement by having the first complete G500 taxi under its own power. Both announced aircraft were part of Gulfstream’s mysterious-sounding P42 project, which had been rumored about for several years. Shortly before the summer of 2014, those rumors intensified when an engineer, working for one of Gulfstream’s subcontractors, inadvertently updated his LinkedIn profile to say that he was working on the P42 project. The update also mentioned three different variants, P42-1, P42-2, P42-3. P42 effectively referred to the fuselage barrel, which Gulfstream had deliberately designed in such a way that it could be stretched, or shortened, depending on which way the market wanted. With the G500 and G600 being the first and second P42 aircraft, it wasn’t until 2021 that the third aircraft, the Gulfstream G400 was announced. With G500 and G600 sales and deliveries picking up pace, Gulfstream announced that it had delivered the final G450 in January 2018. A similar announcement was made about the G550 in 2021, although this was just for the last civil G550. Several military-operated G550s are still due to be handed over, including several examples for the Royal Australian Air Force. 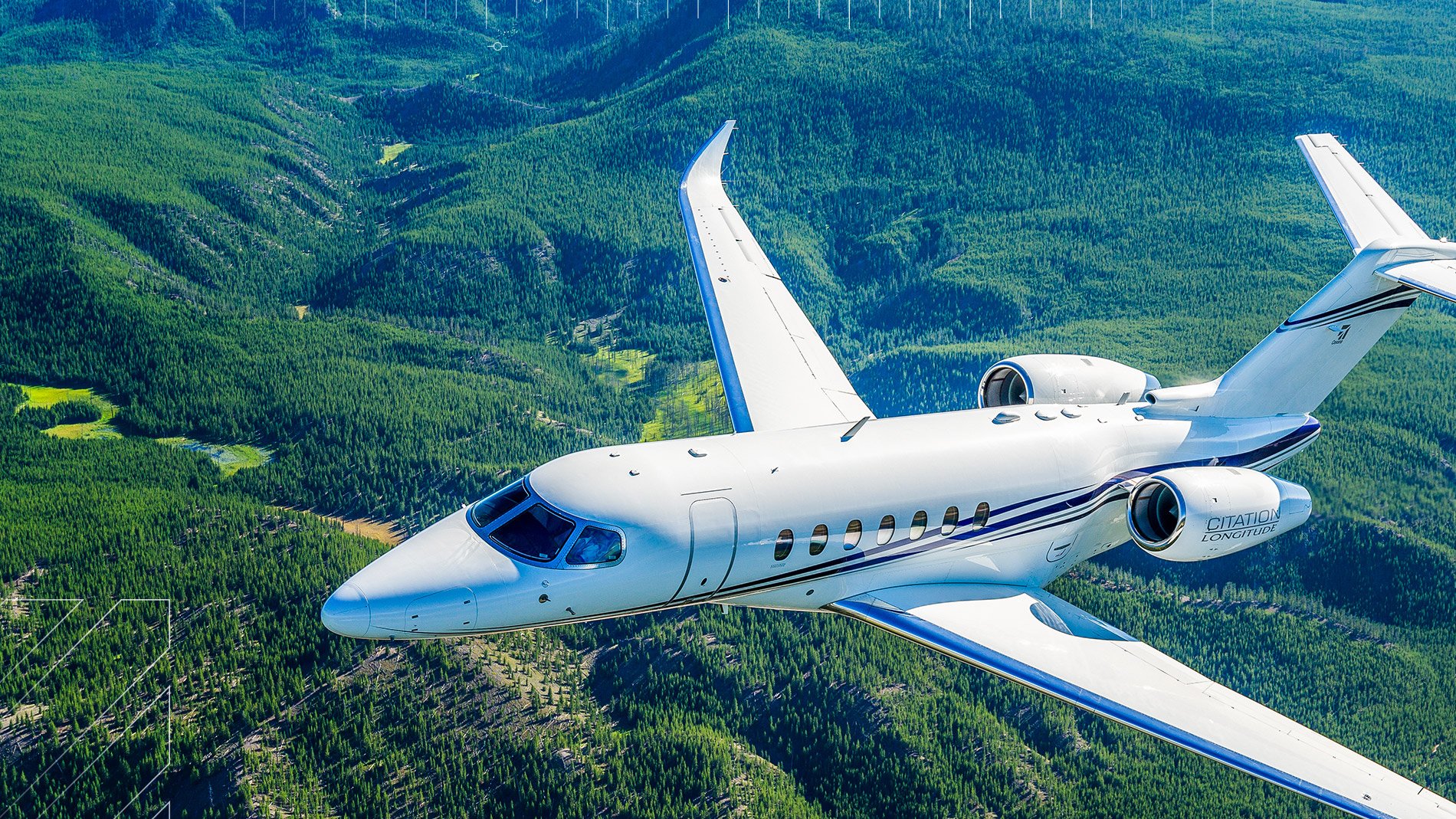 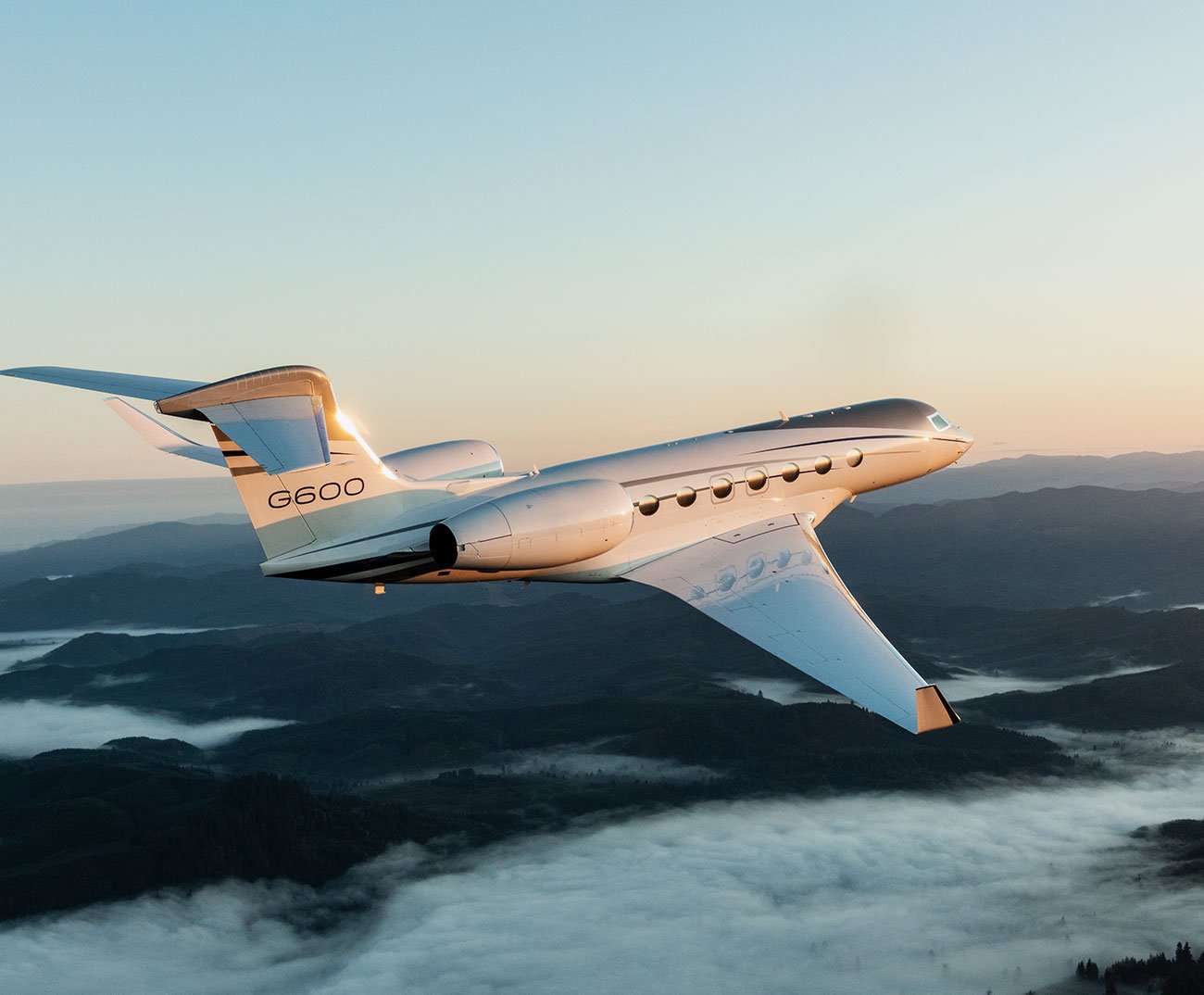 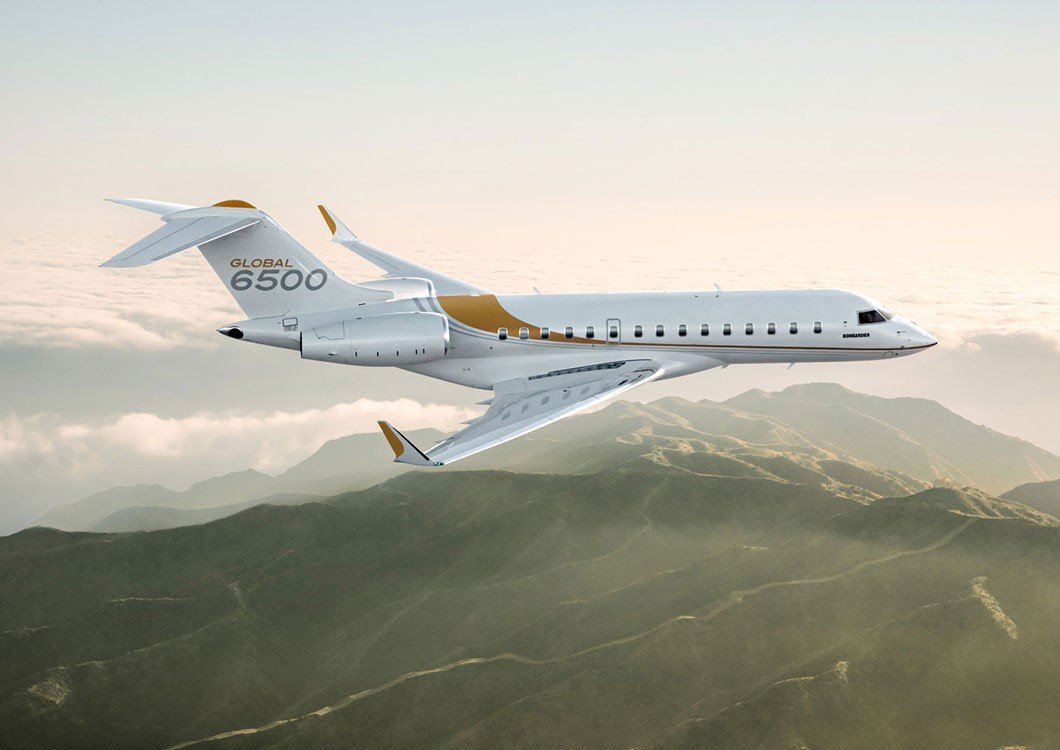 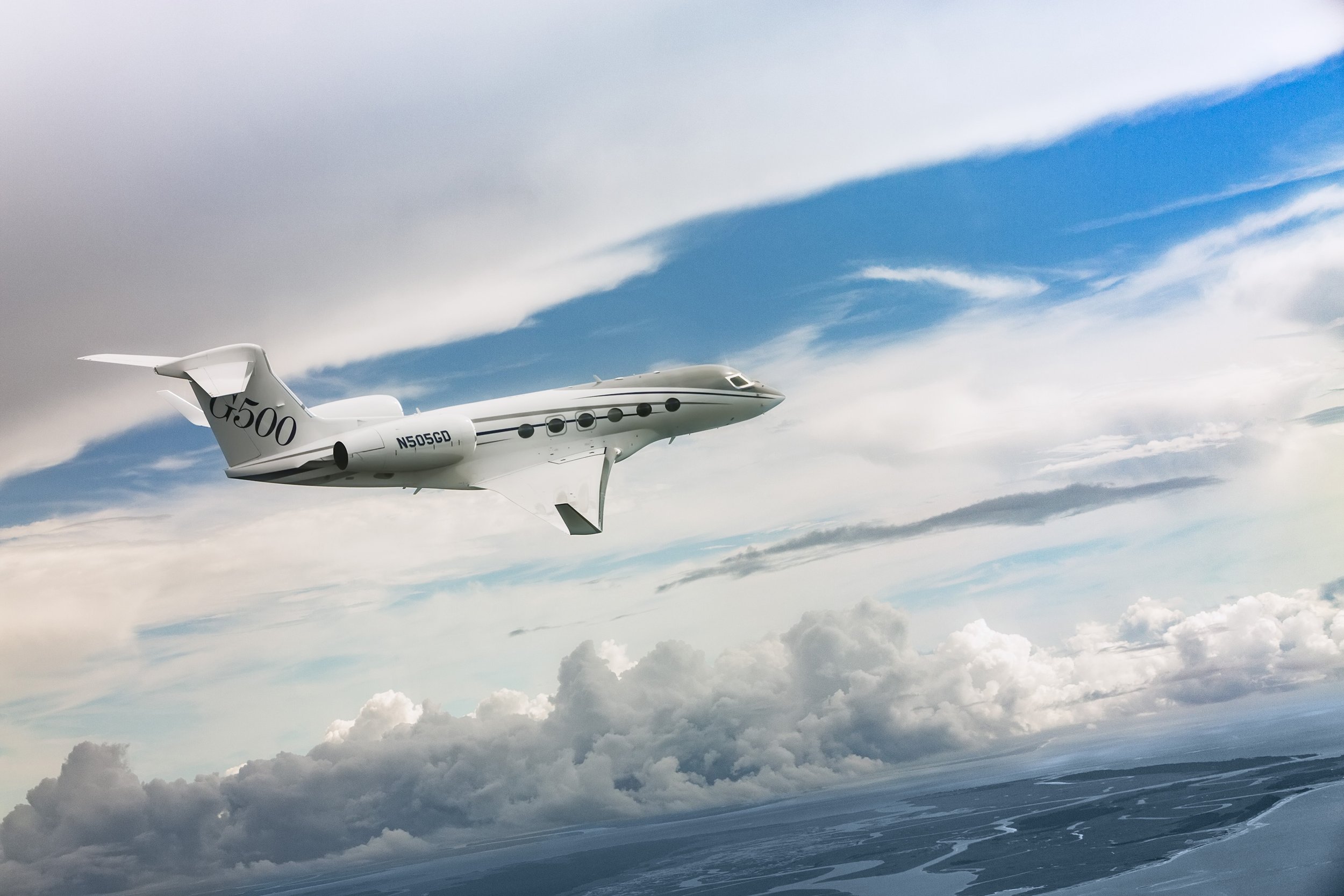 Embraer introduced the Praetor 500 and Praetor 600 in 2018 during a special ceremony the day before the start of that year’s NBAA in Orlando. Both aircraft are effectively upgraded Legacy 450 and Legacy 500s, with improved engines, avionics, and interiors. Both aircraft are fairly unique, in that the fuselages are built in Brazil, the wings are built in Portugal and the aircraft are assembled in the US. The earlier Legacy 450 and Legacy 500 were built in Brazil, then flown to the US to be completed, which is a similar arrangement that Gulfstream has with IAI for the G280 – where the aircraft is built in Israel, then flown to the US to have its cabin completed. Both the Praetor 500 and Praetor 600 gained type certifications in 2019, with initial deliveries taking place later in the same year. Neither the Legacy 450 / 500 nor the Praetor 500 / 600 have found much success in Asia-Pacific.

Embraer also delivered the final Legacy 650E and Lineage 1000E during the period. The Lineage, based on Embraer’s popular E190 family of commercial regional jets, had a short production run of just 25 aircraft. A good portion of those aircraft have been based in the Asia-Pacific region at some point. The Legacy 650E was an upgraded Legacy 650, which was itself based on Embraer’s best-selling ERJ-135 regional jet. The Legacy 650 family sold well in Asia, especially in mainland China. 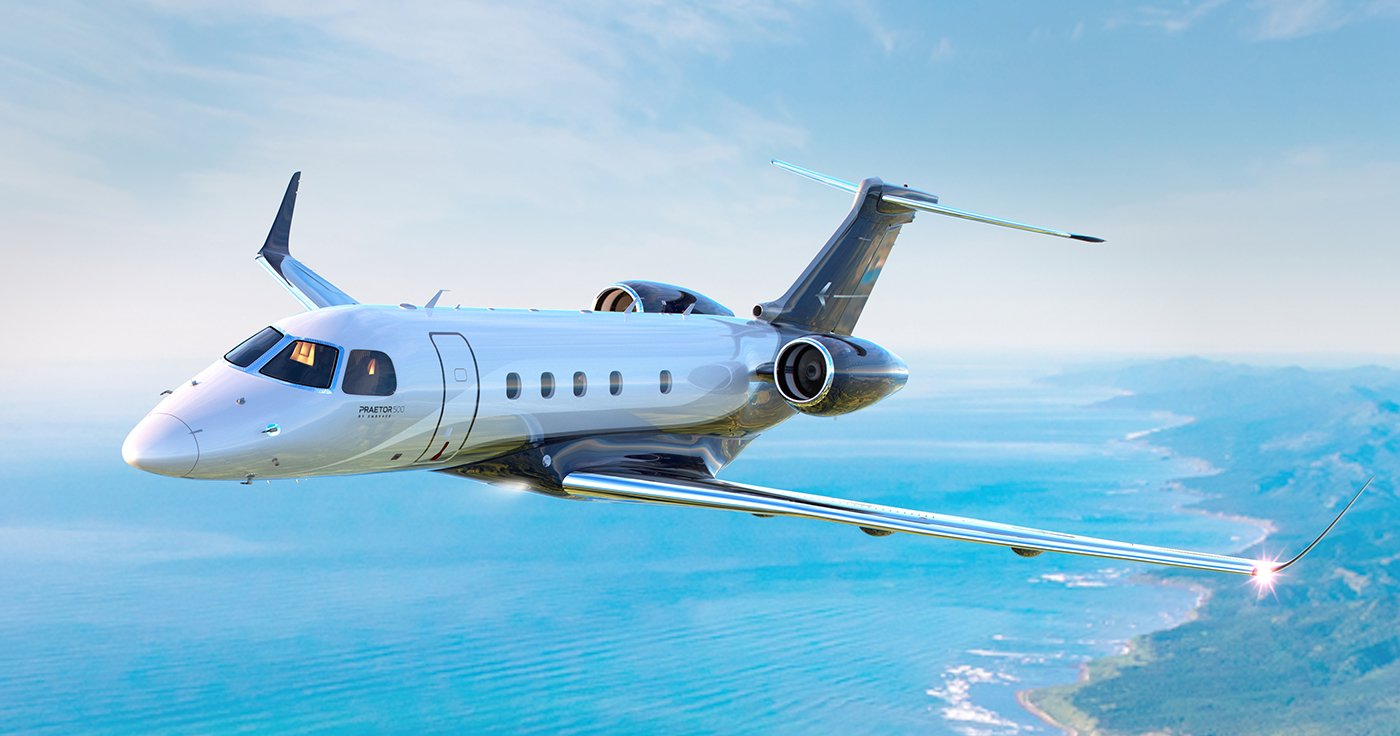 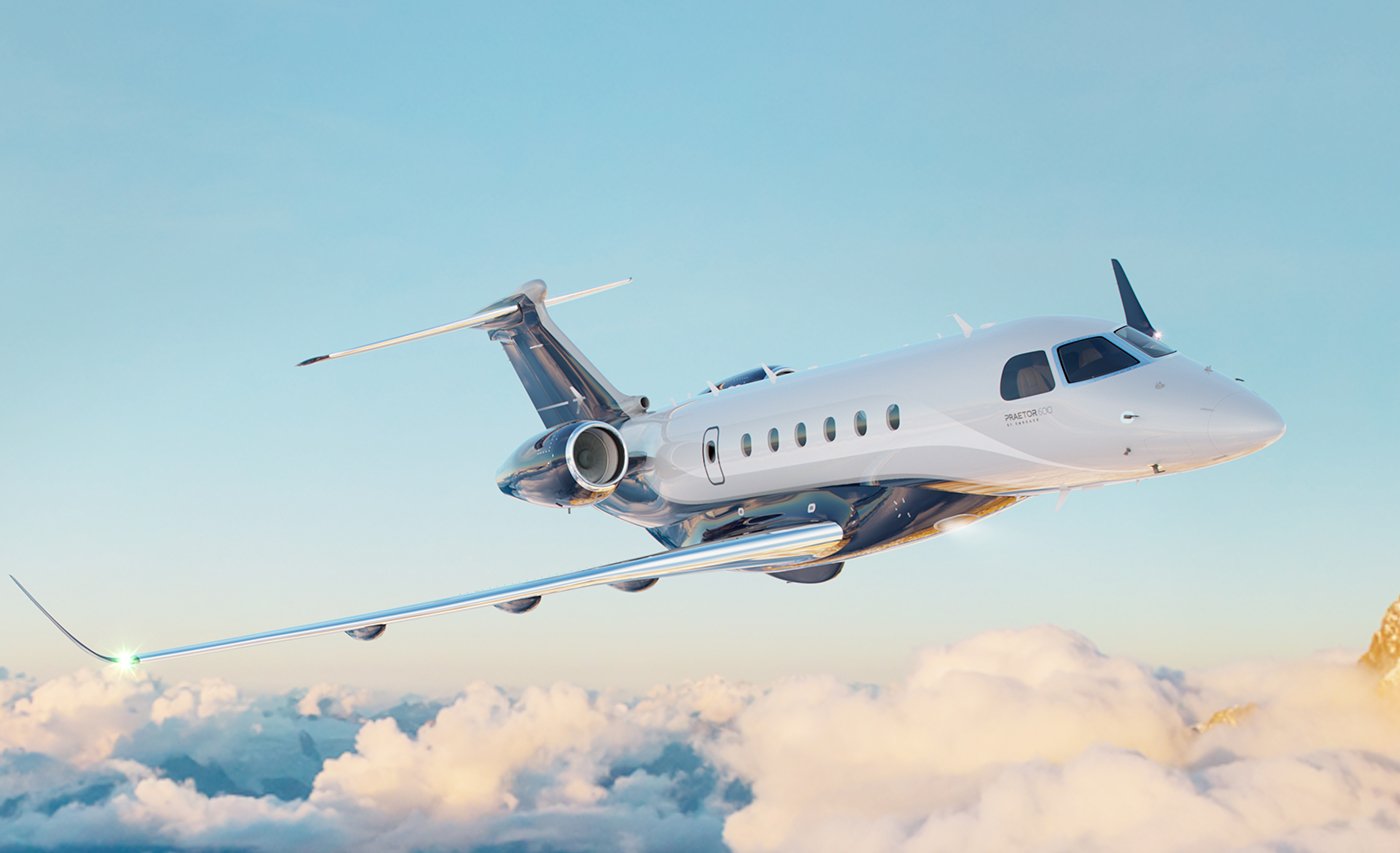 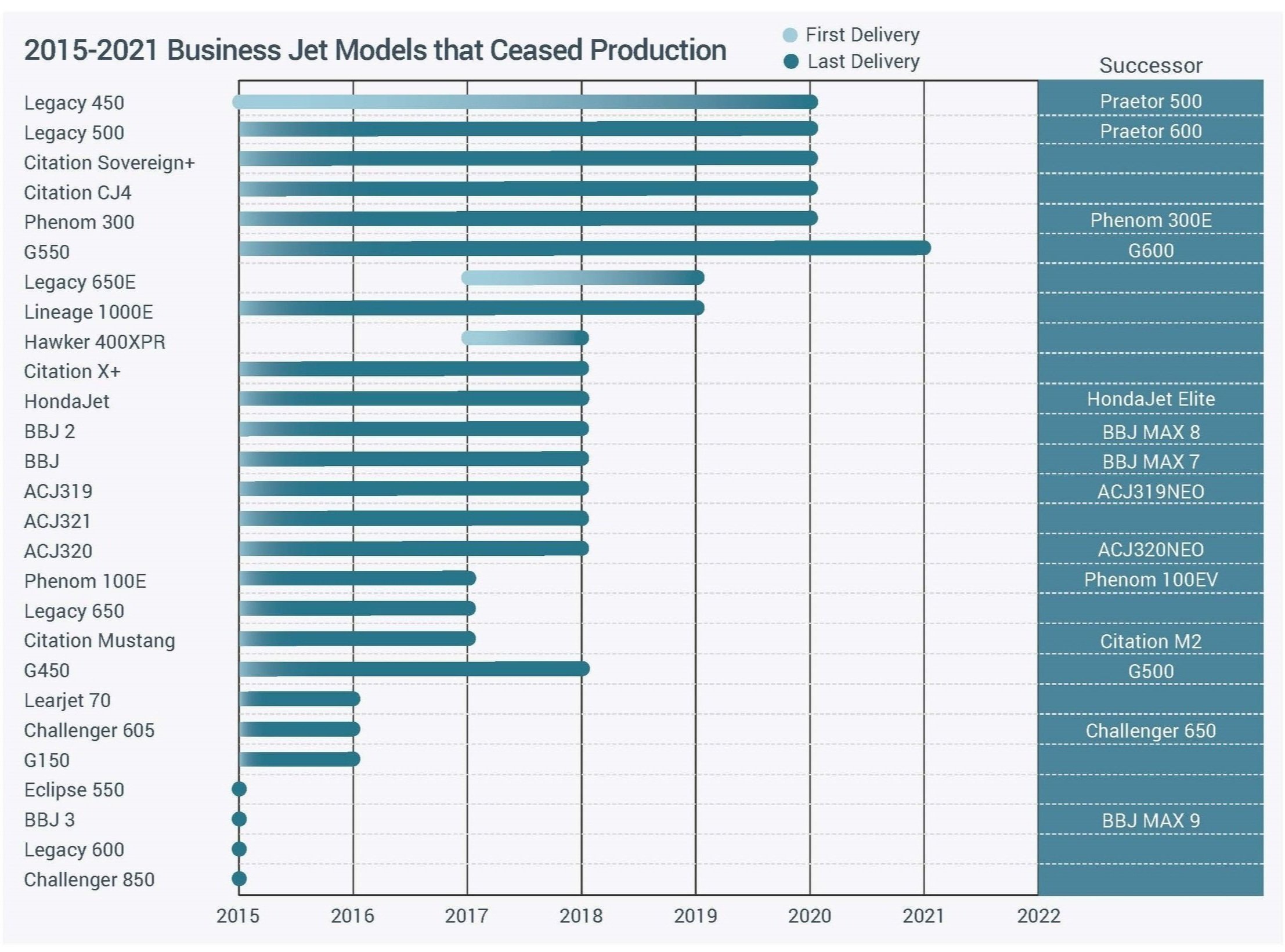 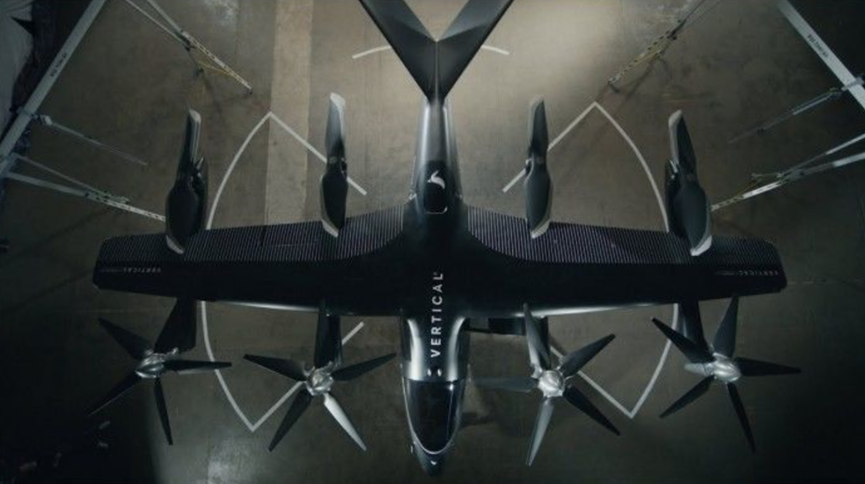