Although it seems like choosing an aircraft registry is a simple process, the reality is that it can be a difficult decision that can impact where and how an aircraft is operated, as well as the aircraft’s residual value.

Australia had the third most popular registry, which, unlike mainland China and the US, has been growing for the past few years. At the end of 2021 there were 195 VH- registered business jets, which was up from 188 at the end of 2020.

When combined, the registries of mainland China, the United States, and Australia, account for 55% of the total Asia-Pacific fleet.

There are several reasons why an operator might want to register an aircraft outside of Asia-Pacific, even though the aircraft is physically based and operates in the region. As one of the oldest registries in the world, the US N registry can provide many benefits for owners, especially when it comes to disposing of the aircraft, as the US has a well-established trading system, which can be less problematic when it comes to completing a transaction. Owners and lenders can also enjoy easier and faster closing procedures, especially as US authorities now accept digital signatures. 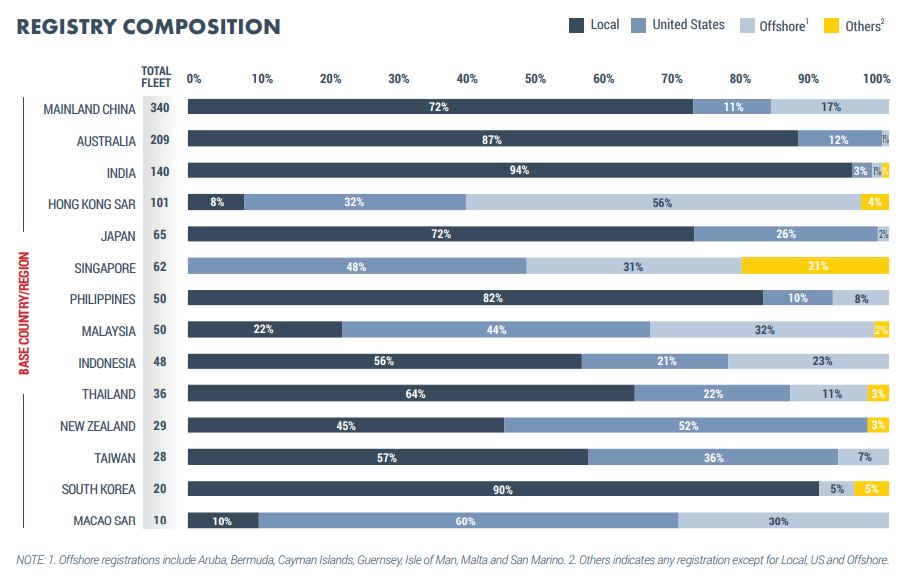 Mainland China topped the list as the country with the most business jets. Out of the 340 jets, 72% were locally registered, with the majority fitting into the Large / Long Range categories.

Australia retained its second position with 209 jets based in 2021. Of these, 87% were registered in-country on the local VH- registry. This may be due to the majority of the fleet being Light jets which operate almost entirely within Australia. The Indian market is similar, in that the majority of business jets are in the Light jet category, and 94% of the 140 jets in the country are registered on the local VT- registry.

Japan has the fifth highest number of business jets based in Asia Pacific. A total of 65 jets are based in the country, with 72% being locally JA registered. US N registry dominates the Long Range and Corp. Airliner size category, taking 26% of the total fleet.

Singapore was ranked 6th with 62 business jets, of which 47% were in the Long Range category. It is the only Asia-Pacific country that has no aircraft registered locally. Instead, 48% of the total jets were registered in the US (N).

Offshore registries are favoured by an increasing number of jet owners. There are three main advantages to use an offshore registry: The first is ease of flight operations – some countries do not allow aircraft registered in certain countries to visit, however offshore registries remain neutral places to register. Offshore registries also often offer a flexible tax structure. In addition, there is a certain level of privacy offered with offshore registries. Some offshore CAAs even provide local support in the aircraft owner’s country, such as Bermuda Aircraft Registry hiring a full-time member of staff based in Shanghai to offer timely response to Chinese clients.

After a dramatic increase in offshore registered aircraft, from 164 in 2019 to 185 in 2020; there was a slight decrease in 2021 to 182 aircraft. The Cayman Islands (VP-C) remained the most popular, holding a 48% market share of all offshore registries in Asia-Pacific, although it saw a decline of six aircraft in 2021.

San Marino’s T7- registry was one of the most recent to be set up, and has been making good progress in the Asia-Pacific market. At the end of 2021 there were 45 T7- business jets in Asia-Pacific, equivalent to a market share of 25%. This was an increase of seven aircraft in 2021, the biggest gain seen across all offshore registries during the year. The Isle of Man’s M- registry remained the third most popular offshore registry with 21 aircraft and a 12% market share, with the Registry of Bermuda (VP-B/VQ-B) following closely behind with 16 aircraft and a market share close to 10%.

Singapore came next with 19 aircraft, which was followed closely by its neighbouring country Malaysia, with 16 offshore registered aircraft in 2021. 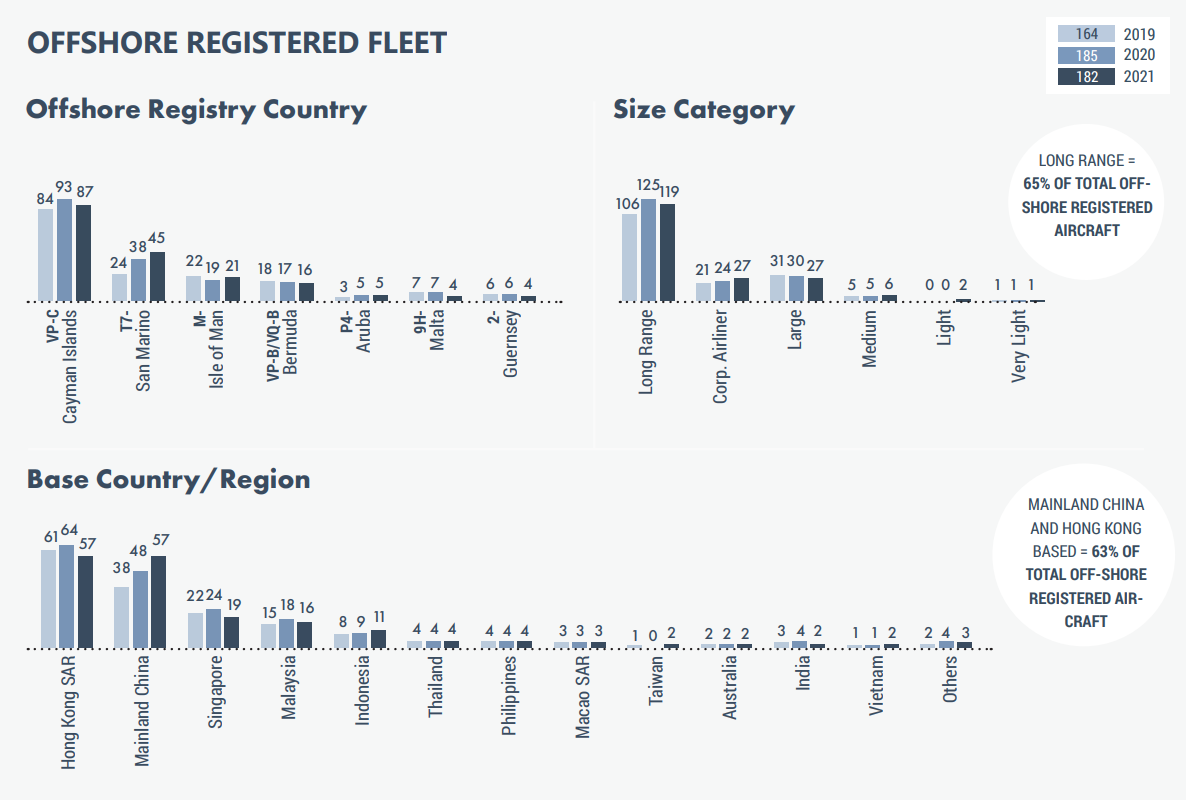