Very few people would believe that life would be so fundamentally different now, compared to six years ago when we first started our Quarterly Survey.

Ever since the first Quarterly Survey results were published, we have been capturing Asia-Pacific’s market trends, optimism levels, intentions, and expectations. Over six years, and 25 issues, we have witnessed changes in the US presidency, a trade war between the US and China that is now finally nearing its end, political unrest in Hong Kong, and of course, the coronavirus.

We would like to thank each one of the thousands of respondents, without whom the survey would not be possible. Looking back through the survey results over the past 25 issues has been fascinating, with a clear correlation forming between major global events and dips and troughs in Asia-Pacific’s optimism. Below we chart some of the major events and how they affected the survey results.

The graph above plots regional economic sentiment against that of respondents in Greater China. For the large part, the events that affected the mood in Greater China, also had an effect on the rest of Asia-Pacific as well, although in some cases this was less pronounced. The key take away is how important China, and its Special Administrative regions, are to the fortunes of the rest of Asia-Pacific.

Nowhere is this more evident than the China–US trade war. Many parts of Asia-Pacific supply materials that China use to manufacture goods that have since been subject to US tariffs. The knock-on effect, or at least the early perceived knock-on effect, was that the initial batch of tariffs would be just that – an initial batch, and that the trade war would escalate to the point to that it would cover many more products. This affected the economic optimism of both China and the rest of Asia-Pacific from the beginning of 2018, right the way through until the start of 2020, when a trade agreement was signed.

Early 2020 is the point that optimism showed the biggest difference between China the remainder of Asia-Pacific. This is most likely due to the differing phases that the region was in with the coronavirus pandemic. Having been first identified in Wuhan China right at the start of 2020, China moved swiftly to try and contain the virus, with various lockdowns implemented across the country in cities with high caseloads. These were largely confined to the first half of the year, with the remainder of seeing China’s economy rebounding.

However, it wasn’t until the second half of 2020 that the coronavirus really started to affect the rest of Asia-Pacific, and with it came a drop in optimism across the region.

Below we take a look at some of the major events that have affected optimism in the region since the first ASQ at the end of 2015.

The US-China trade war began in July 2018 under the administration of then US President Donald Trump, and eventually led to tariffs being placed on some US$550 billion of Chinese goods and US$185 billion US goods.

The trade war had a direct effect on business aviation in the region, especially in China, where aircraft utilization dropped by half. This was very much noticeable in the number of business aircraft flights between the US and China. As the trade war escalated, we saw optimism from respondents drop off a cliff. This did temper momentarily in Q4 2018 when it looked like the two sides might be getting close to an agreement, however, optimism levels did not see any meaningful increase until the first quarter of 2020 when a phase one trade deal between the two sides was finally signed. However, before that, optimism levels in Greater China were a lowly 29%. This was partially caused by the protests that erupted in Hong Kong.

With optimism already low, an outbreak of protests in Hong Kong, commonly referred to as the Anti-Extradition Law Amendment Bill Movement, during 2019 caused another drop in optimism. The protests, which began in March 2019 became increasingly violent as more and more demonstrations happened. Shops and businesses closed early when scheduled protests were due to take place, with the Hong Kong economy taking a massive hit. Visitor numbers to Hong Kong also dropped significantly, and at one point Hong Kong’s International airport was closed due to a protest taking place. The protests were due to continue into 2020, however, the outbreak of the Coronavirus curtailed these.

The first Coronavirus cases were recorded right at the beginning of 2020 in Wuhan, China. As a result, Wuhan, a city of 11 million residents, went into lockdown to contain the virus as much as possible. Unfortunately it had already begun to spread, and soon there were outbreaks in other Chinese cities, as well as in other parts of the world. However, economic optimism in Greater China showed no signs of dipping, in fact, it began to grow. This could be because of the low base it had to grow from, having reached a low point of just 29% in the final quarter of 2019. Whilst the rest of the world was grappling with the virus and seeing lockdowns and border closures, China’s economic optimism kept increasing. This was also seen in the country’s GDP growth. During the first and second quarters, industrial output slowed, as firms in virus-hit areas had to temporarily close, but by Q3 China’s GDP had begun its bounceback. This is very much reflected in the optimism graph below, with optimism increasing right the way through 2020 before plateauing in 2021. 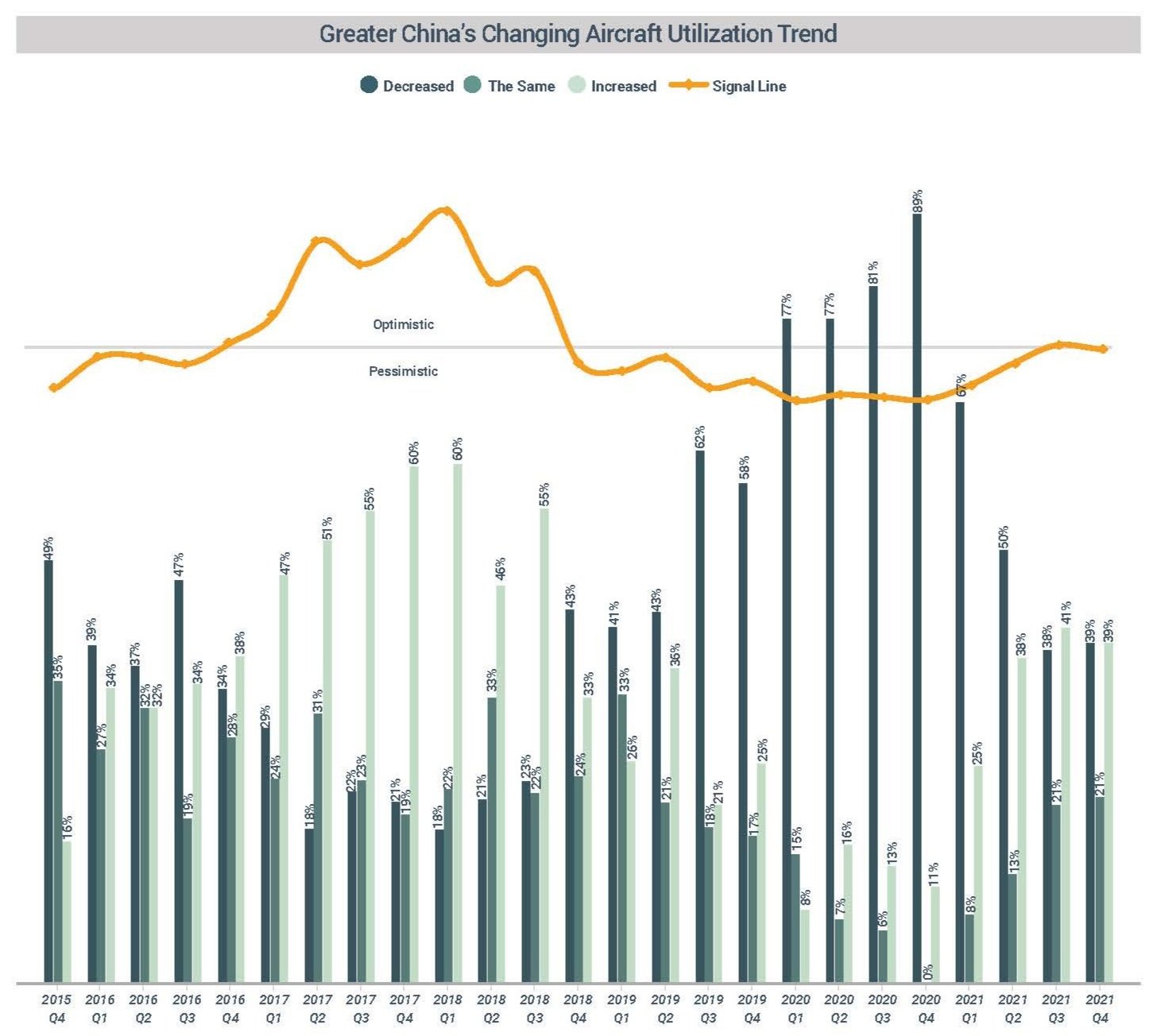 Since the start of the pandemic, international flights around Asia-Pacific were put on hold, as border closures and strict quarantines forced people to stay home. As a result, aircraft utilization decreased.

In each quarter of 2020, our Greater China respondents said their fleet utilization level dropped by over 70%. However, we believe the actual numbers might be a lot higher after we examine the actual flight activity in the region.

“Where are we in the current economic cycle?” When the question was first sent out to industry colleagues based in the Asia-Pacific region, the world had just come out of an economic crisis, and Donald Trump had been sworn in as the 45th US president and signed the biggest US tax transformation bill in history. Things were looking great and this was reflected in our survey – the pessimistic line representing APAC’s economic mood has been low ever since the first issue.

In general, the market economic mood has been optimistic. The lowest optimism level we have seen was 50% and that was when the Covid-19 pandemic started. Through the graph, we can also see that pessimism levels began to rise again in 2018. Therefore, we believe that the Sino-US trade war and the pandemic had a big effect on the market, not only in Greater China but also in the rest of Asia-Pacific.

Despite being optimistic, the aviation industry is becoming more realistic as well. In the survey, although we categorized people who believed that we are at a “low point” regarding the economy to be “optimistic”, there have also been more people recently choosing to believe that “the economy will get better, but just not now.” The number of people who chose “We are at a low point” has been increasing and in Q4 2021 reached 46%. 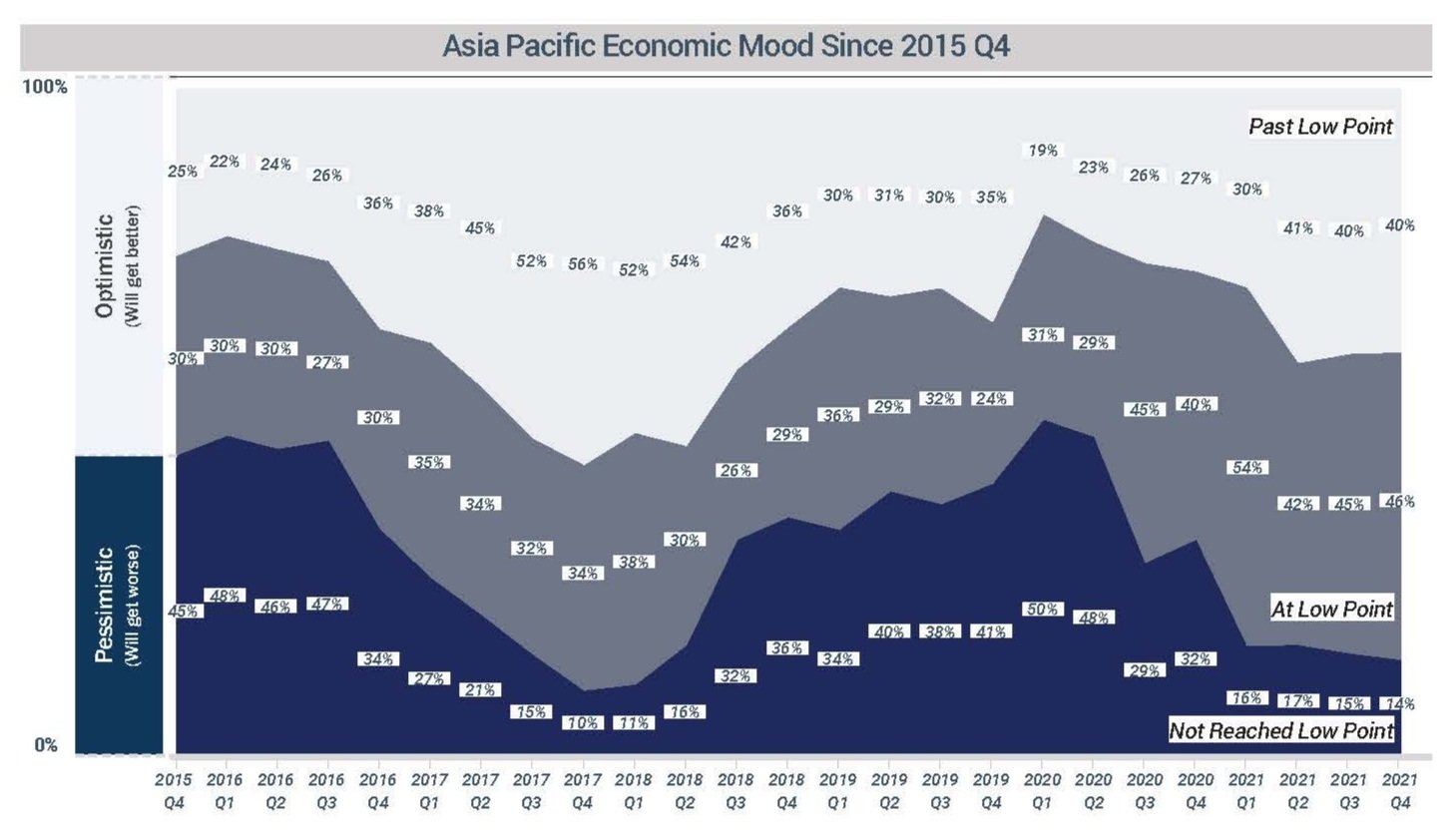 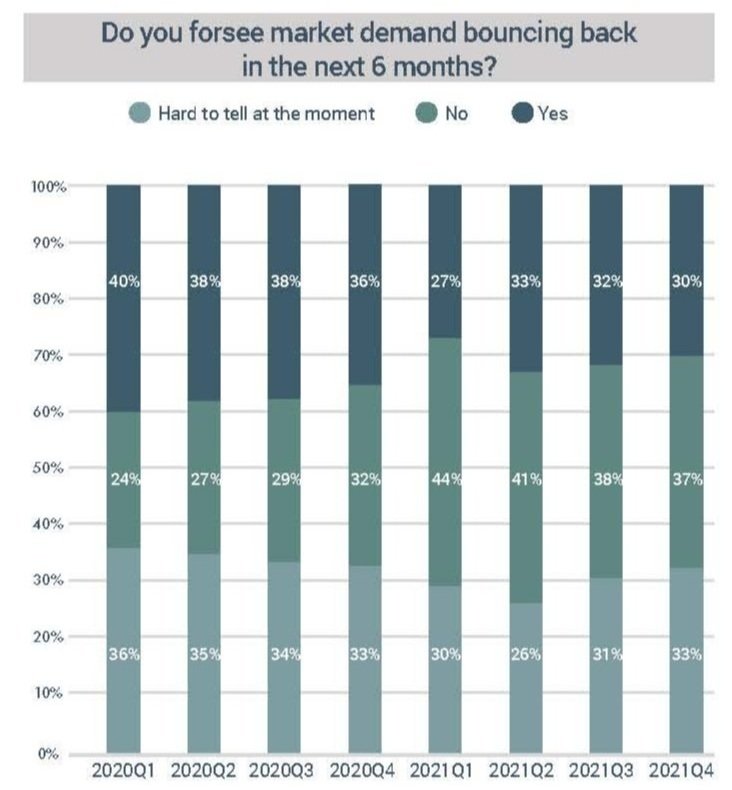 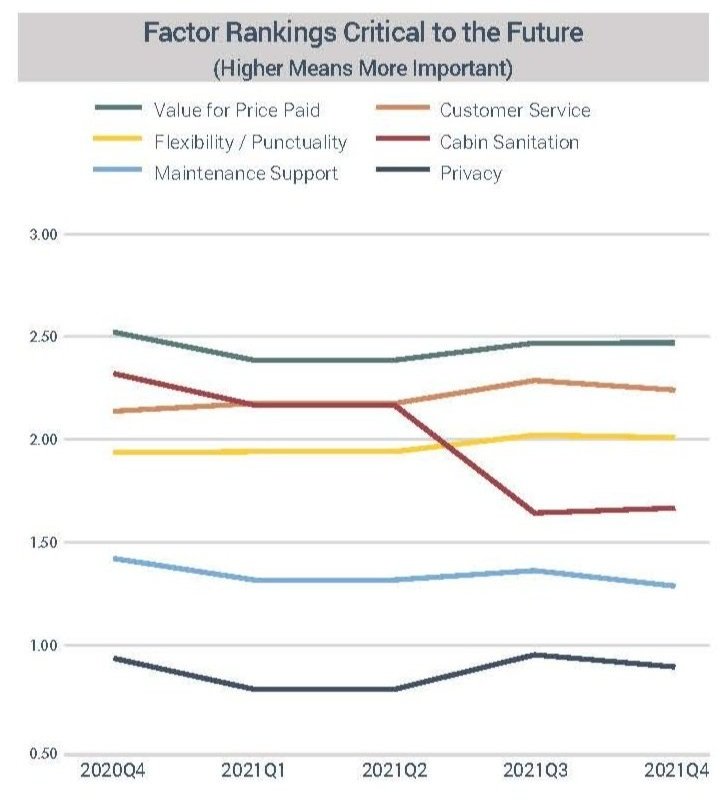 Back in mid-2020, over 60% of people believed that we were in a buyer’s market. Due to changes in transactions, inventory levels, and pricing, we told people that the trend of the pre-owned market has reversed and is instead moving towards a seller’s market. Not many people were prepared for that initially. However, there is no doubt that we are currently in a seller’s market, with historically low market inventory and transactions. 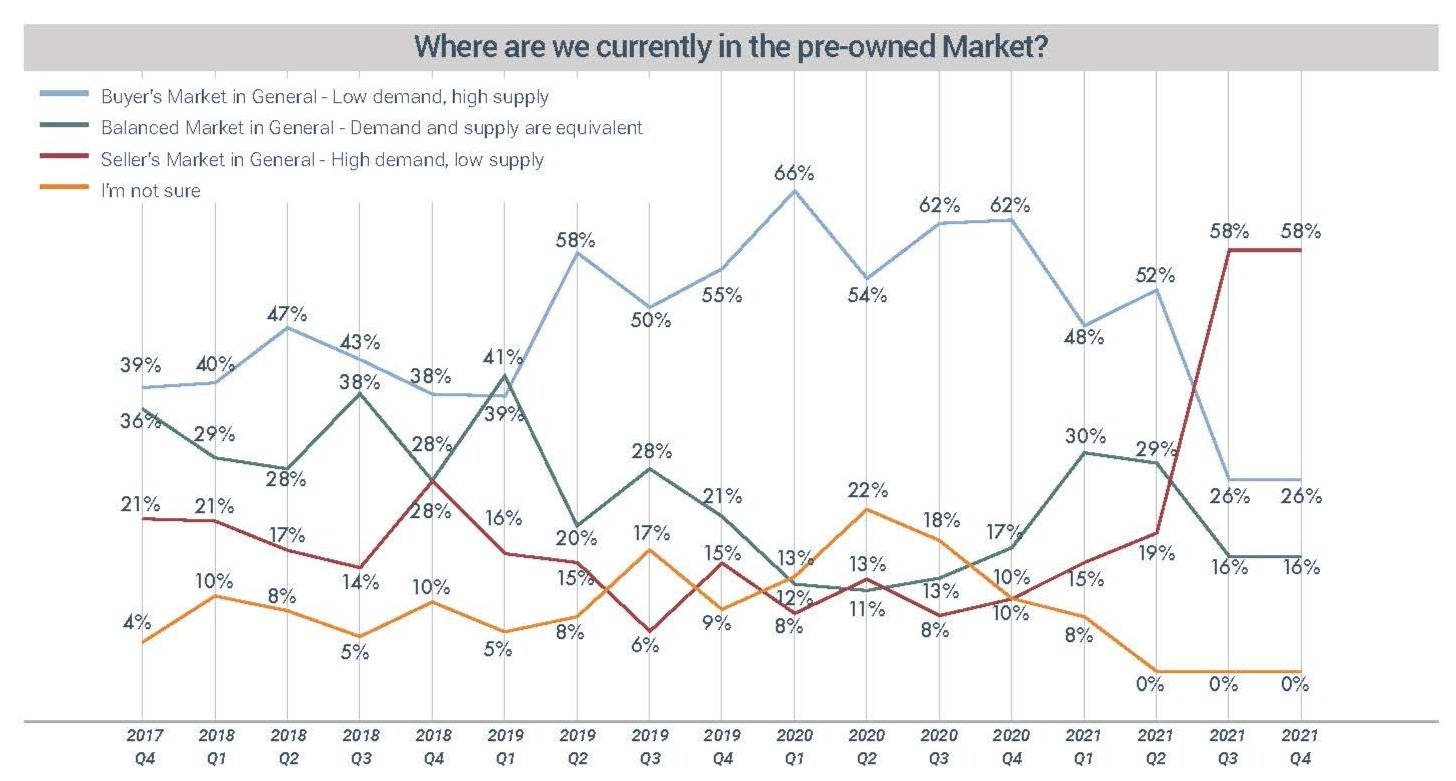 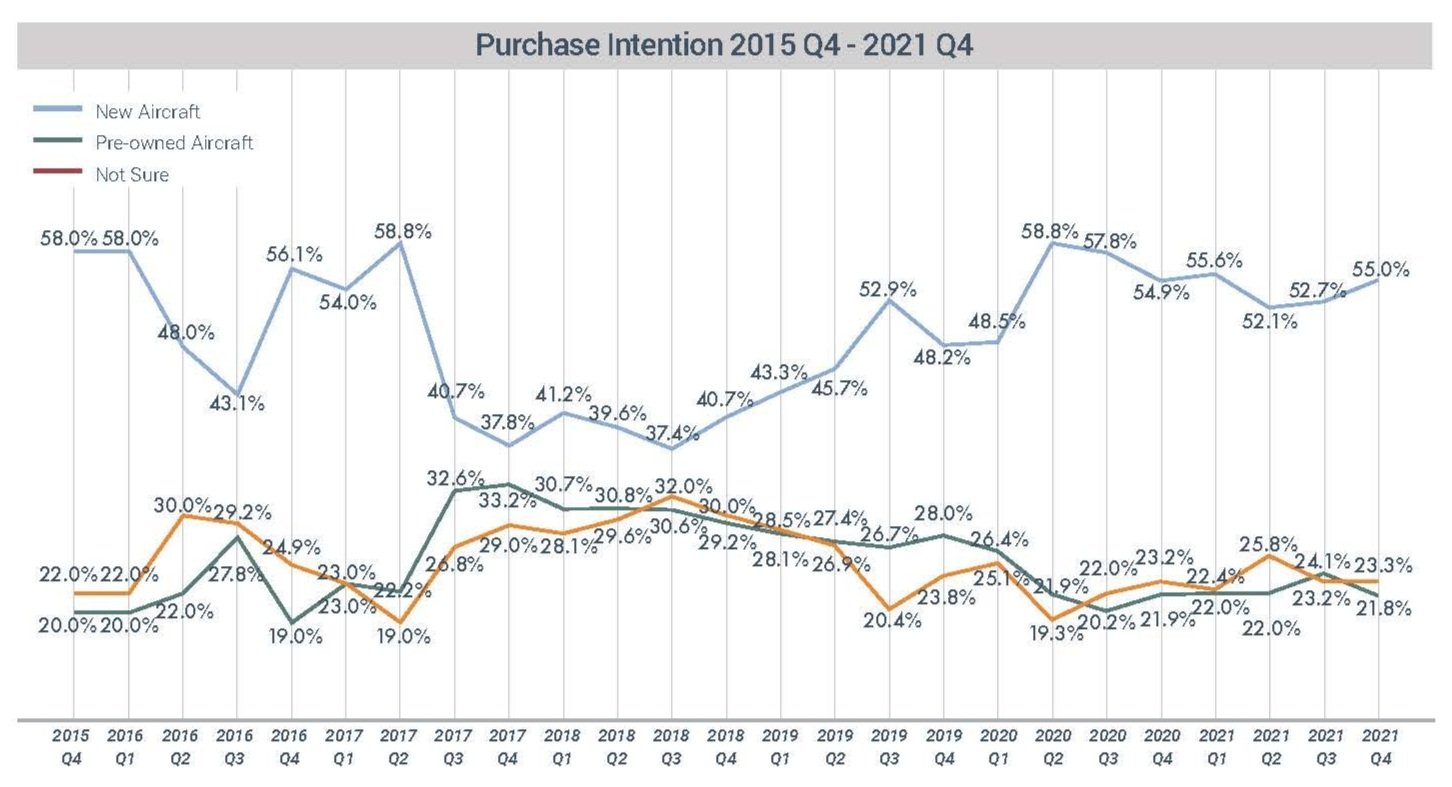 by Global Sky Team June 27, 2022
COVID-19 Pandemic in Asia-Pacific In the first quarter of 2022, as the borders between countries…
Other

by Global Sky Team January 28, 2022
Very few people would believe that life would be so fundamentally different now, compared to…