In the late 1990s we saw a new trend emerge where traditional business jet manufacturers, including Gulfstream, Bombardier, and Dassault, began working on aircraft with larger cabins and longer range than they had before, whilst commercial aircraft OEMs including Airbus, Boeing and Embraer began producing executive versions of their most popular airliners.

Of these, the BBJ family has been amongst the most significant and it has also seen the most success.

Based on Boeing’s wildly successful commercial 737 (Next Gen) airliner, the Boeing Business Jet (BBJ), was first introduced to market in 1996 to compete with traditional business jets, and according to the manufacturer aimed to bring ‘the best of commercial aviation into the realm of private air travel’.

Boeing’s sales team is keen to let buyers know that owning a BBJ means that you’ll have a much, much more spacious cabin than traditional business jets. You’ll also have a myriad of different interior completion options and reliability that comes from the commercial airliner support. However, aircraft are originally delivered ‘green’, meaning that the aircraft still needs to have its exterior painted and its interior completed, This process can take anywhere between six months to two years to complete, depending on the complexity of the aircraft’s interior.

Even though the BBJ family are not purpose-built for business aviation, they benefit greatly from the underlying industrial strength platform. Built to fly 4,000 hours per year, their reliability and residual value are far superior. Maintenance, and training cost less, and the range covers over 99.9% of all sectors flown.

There have been 157 BBJ family (BBJ 1/2/3, MAX 8, BBJ 787 and 800NG) aircraft delivered so far. When combined, the top five countries and regions – US, United Arab Emirates, Saudi Arabia, Canada and Greater China, account for nearly 90% of the total fleet. Regionally, the majority (50 aircraft) are based in North America (Mainly BBJ1s) whilst the Middle East is the second largest market, with 40.

BBJ (referred to as the BBJ 1)

The most delivered business airliner from Boeing is the BBJ 1, which is based on the 737-700 airframe, but borrows the strengthened wings and landing gear from the larger 737-800 series.

The BBJ 1 competed with Airbus ACJ319 and Embraer Lineage 1000, but by the time Boeing switched production to the BBJ MAX series, the BBJ 1 had outsold its competition.

The BBJ 1 can have up to nine auxiliary fuel tanks installed under the belly of the airframe to extend the aircraft’s range to over 6,000 nautical miles (11,000 kilometers) The additional range means that under certain conditions the BBJ 1 can fly non-stop between Hong Kong and London

Most BBJ operators choose to install seven fuel tanks in their aircraft, which boosts the BBJs range to 6,000nm. Typical flight routes for a BBJ 1 include Hong Kong – Dubai/Moscow, or Beijing – Paris.

The engines used on BBJ 1 are the CFM56-7B, which is in common with other members of the 737 NG family. The basic engine variant, the CFM56, is installed on both the 737 and A320 family aircraft, making it one of the most commonly used engine types currently in service. With so many engines in service, CFM has been able to increase the engine interval maintenance period to 17,000 cycles. It also means that there are far more engine MROs around the world competing for the business, making the engine program cost cheaper than traditional purpose-built business jets.

As part of the 737NG family, the BBJ 1 uses traditional mechanical controls, which helps maintain the type rating with the commercial 737 NG family, and in doing so ensures that no conversion training is required. In the cockpit a heads-up-display (HUD) ensures that pilots flying the aircraft have all relevant information readily available ensuring their situational awareness during critical phases of flight.

The BBJ offers plenty of space, with a typical configuration consisting of four cabin areas: a boardroom, a lounge, a VIP bedroom with en-suite bathroom and shower, and an office. The aircraft is a popular choice amongst government entities and corporations, which generally require a higher density configuration. Several interior completion centers are available for the BBJ, including AMAC, Ameco, HAECO, Jet Aviation, Comlux, Greenpoint Technologies, Aloft, Lufthansa Technik, all of which can complete a variety of cabin designs, seating from 15 to more than 40 passengers and catering to different purposes from luxury VIP / Executive to government entities.

Boeing’s narrowbody BBJ MAX 7/8/9s are the company’s newest introductions to the business aviation market. The BBJ MAX 7, the direct replacement of the BBJ 1, has a range of 6,600 nautical miles (12,225 kilometers) and has a noticeable decrease in operating cost vs. the original BBJ 1 model. The BBJ MAX 8 and 9 models are derivatives of the commercial 737 MAX 8 and 9. The new advanced technology winglets installed across all models reduce drag. The BBJ MAX family uses the new CFM LEAP-1B engines, which decrease specific fuel consumption (SFC) and increase range by up to 15% versus the previous CFM56 generation engines.

The BBJ market segment, along with other business aviation sectors, has been booming, although in the past month there has been signs that it is slowing down. However, BBJ models are fairly unique, in that they retain around 90% of their value, even after being in service for ten years. Pre-owned inventory for BBJs is the lowest we have seen to date, which is putting upwards pressure on pricing.

The BBJ market is also niche due to the level of customization that goes into the cabin completion. Often aircraft are outfitted to an owners personal taste, which has in the past had a major impact on the aircraft’s resale value. What one owner thinks is tasteful, is potentially tasteless to the next owner. Given this, the completion costs and interior depreciation curve is often a difficult area for buyer’s and seller’s to agree on.

Despite this, there has recently been an uptick in interest in pre-owned BBJs globally, including in greater China, where large cabin and long-range jets are favoured.

Although the market for corporate airliners is very small when compared to the rest of the business jet market, the BBJ family has managed to carve out a niche for itself, and we expect this to continue with the new MAX models. 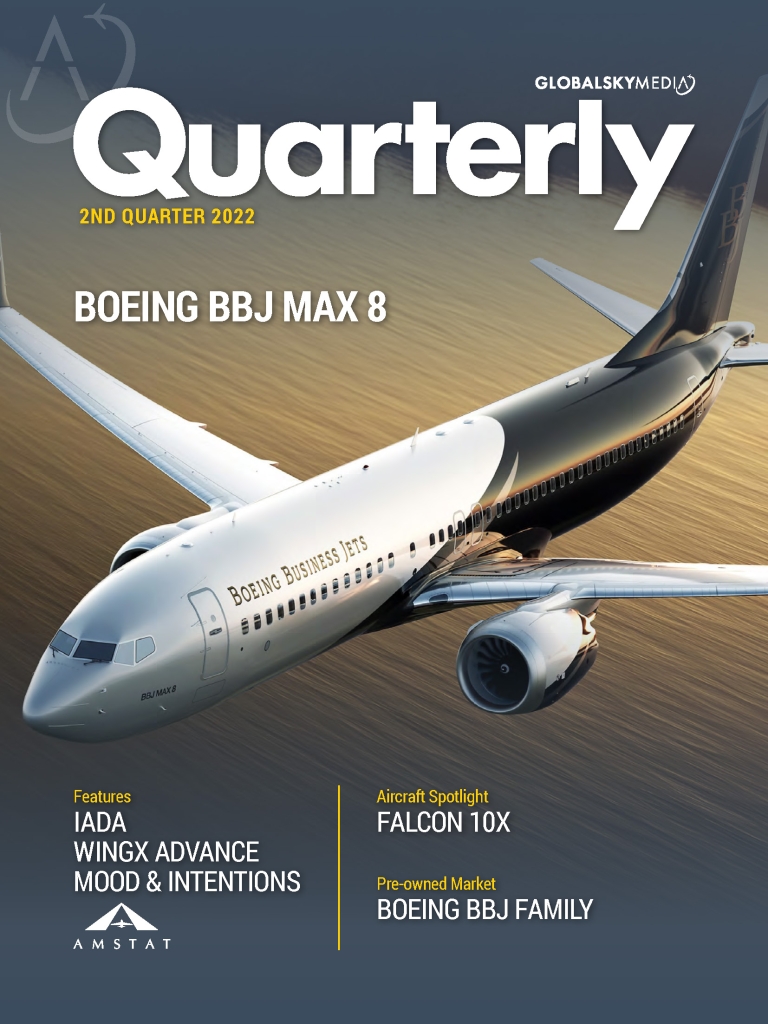